Blue Moon Talent, Inc.
The Beatles Tribute
The Beatles Tribute, 4 Lads From Liverpool, take you through an epic journey that begins in the early days in Hamburg, Germany and the Cavern Club in Liverpool, then fast forwards to the Sgt Pepper era and beyond.
Los Angeles, CA
USA
info@bluemoontalent.com
828-357-5537 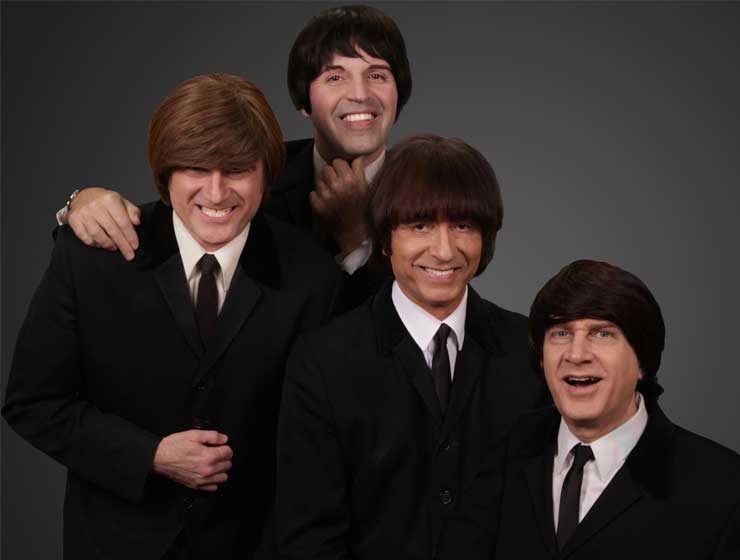 The Beatles Tribute, 4 Lads From Liverpool, take you through an epic journey that begins in the early days in Hamburg, Germany and the Cavern Club in Liverpool, then fast forwards to the Sgt Pepper era and beyond.

The Beatles changed the way we all listen to music, and to pay homage to their craft and to ensure authenticity a great deal of time was spent on researching the rich history of the group and the era they helped define. It was a moment in time that is seared into our hearts and minds - the era of war and peace, violence and free love. The message of love that came out of their music is universal and has stood the test of time.

JIMMY POU
George Harrison, portrayed by Jimmy Pou, toured the world with the original Beatlemania show. He has also played with 1964 the Tribute, Beatlemania Now, and Rain. He also has his solo tribute to the quiet one called "An Evening With George." Jimmy is also the founding member of “4 Lads From Liverpool” and is the leader of the show.

HOWARD PATTOW
John Lennon, portrayed by Howard Pattow, has toured with "Which Ones Pink," a tribute to Pink Floyd, and fronted a Monkees tribute show in the past. Howard also works with a Genesis tribute show and has played in several Beatles shows such as BackBeat and Twist and Shout

JON PERRY
Paul McCartney, portrayed by Jon Perry, is a naturally left handed guitarist. He has the vocal range and personality of Paul and his stage presence leaves everyone thinking they have seen Sir Paul himself in action. He has had a solo McCartney tribute show, has toured with RCCL Cruise Liners and has worked with cast members of Beatlemania.

MIKE SARAFIAN
Ringo Starr, portrayed by Mike Sarafian, is a perfectionist at playing the Ringo drum licks, has always worked hard at his craft and has the same charm as the Beatles drummer. Mike was also a founding member of the Beach Boys tribute band “Surfin Safari.”

"You had over 650 fans and most were over 60 years of age singing everyone at the top of their lungs. Surprised the Paramedics didn't have to come great show!!"
--Jackie Stander

"I saw you in Beatlemania twice in Mansfield!"
--Linda McNeill Wilson

"Great show last night! Crowd kept getting bigger and bigger at the park! Everyone, if you get a chance to see Jimmy and 4 Lads From Liverpool this summer, definitely try and go, you will have a great time!"
--Anita Gorham Pederson

"Thank you for a great show last night Jimmy! Nice to finally meet you. Hope to see you again very soon!"
--Loyce Whitehill‎ — at Disneyland.

"No one nails George Harrison like Jimmy Pou"
--Jim Krz

"...Thanks for doing such a great job Jimmy. You are such a pro at what you do amigo."
--Greg George

Hello Goodbye
Jet
Get Back
Got To Get You Into My Life
Maybe I’m Amazed
I Saw Her Standing There
Band on the Run
My Love
All My Loving
You Won’t See Me
Hey Jude
Let It Be
Silly Love Songs
Let ‘Em In
Eleanor Rigby
Coming Up
What The Man Said
Admiral Halsey
Abby Road Medley
I’ve Got A Feeling
Live and Let Die
I’ve Just Seen A Face
Rocky Raccoon
Another Day
Helter Skelter
Let Me Roll It
Drive My Car
Things We Said Today
The Long And Winding Road
Mull Of Kintyre
Lady Madonna
Mrs. Vanderbilt
Bluebird
Blackbird
Can’t Buy Me Love
Sgt Peppers Lonely Hearts Club Band
She’s Leaving Home
Paperback Writer
I’ll Follow the Sun
And I Love Her
Til There Was You
Back In The USSR
Daytripper
Getting Better
Magical Mystery Tour
Michelle
Beware My Love
The Fool On The Hill
Two Of Us
When I’m 64
Yesterday
Honey Pie
Here, There, and Everywhere

Fill out this form to get more information about 4 Lads From Liverpool.