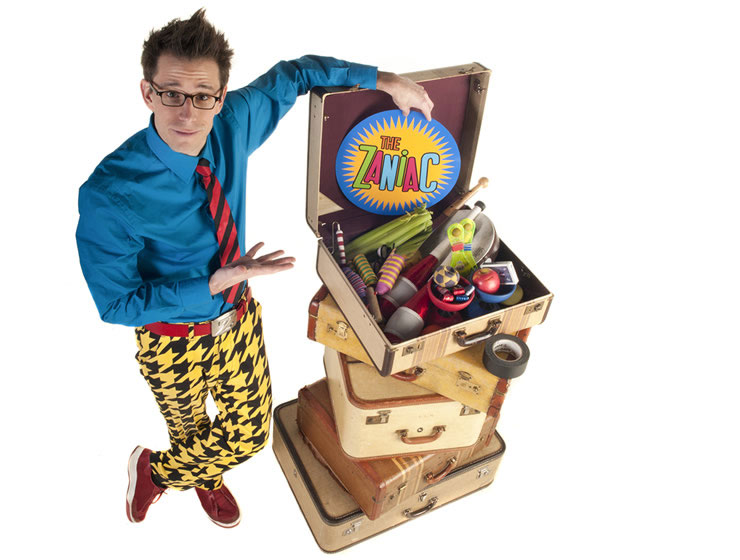 Alex Zerbe is a master of physical comedy, juggling and magic. He is a fantastic choice if you need a clean comedian, corporate entertainer, or emcee.

With the energy of 1,000 suns, The Zaniac shines like a comedy beacon as he bounces from one end of the stage to the other like an untamed rubber band. Jaws will drop, and drool will fly as Alex Zerbe juggles bowling balls, flaming torches and slices vegetables in half with a flying playing card. Every volunteer the Zaniac brings on stage becomes a hero and leaves with a memory that they’ll remember the rest of their life.

As a performer with over 15 years of professional experience, Alex Zerbe has appeared on three national television shows, performed in 14 countries, and has sung in over 12,000 showers! Alex Zerbe is a master of physical comedy, juggling and magic. He is a fantastic choice if you need a clean comedian, corporate entertainer, or emcee. He’s a juggler, magician and an expert at making lists of mind-blowing skills that improve his search engine optimization! Laughter is the best medicine, so if you feel a cold coming on or just need a smile to brighten your day.

"His performance was the highlight of the conference. It changed the whole mood of our event.”
-- Bruce Marshall - Pacific Coast Congress of Harbor Masters

“Finally, the highlight of the evening was Alex Zerbe. Not satisfied with being either a juggler or a comedian, Alex Zerbe decided to be both. His skill with the Chinese yo-yo was phenomenal, and the jokes he cracked put me in danger of choking. In his second act, he kept three hats moving across his body in time with some very complex music. Rarely have I seen such an example of physical grace. I’d watch the [Teatro ZinZanni] show again in a heartbeat just to see his bits.”
-- CultureMob.com

“You got the best, most enthusiastic, loudest applause of the whole conference.”
--Gary Freidman, Clatsop County Fair Manager

“The comedy is non-stop.”
--The Seattle Times

“Your performance was the best part of the event!
--Charlene Raunio - Overlake Hospital

“I am so glad we decided to have you come to our company party. I was amazed at your ability to keep the audience laughing the whole time you were on stage and I am grateful for your professionalism and your flexibility to work around a very difficult setup.”
--Tom Stewart, Chairman Food Services of America

Fill out this form to get more information about Alex Zerbe.