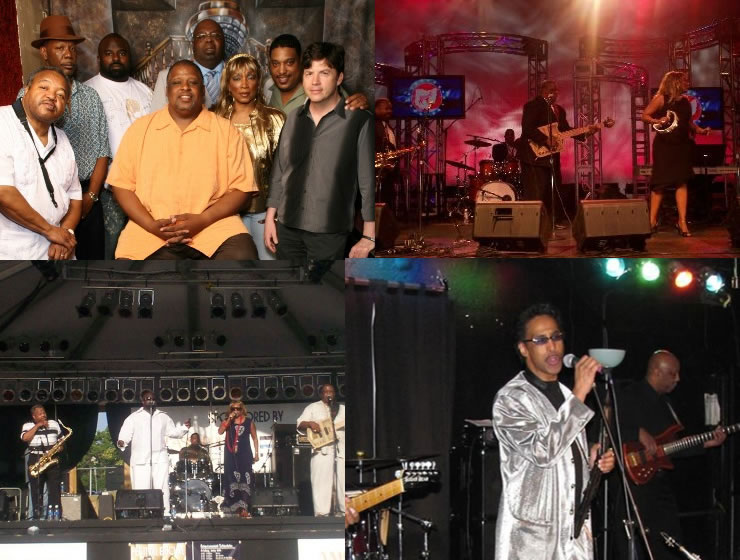 Back in The Day Band

Back in The Day Band, dance and funk band was formed in August, 2002. Larry Lee wanted to put together a group of musicians/vocalist that would rival any national act.

Back in The Day Band was formed in August, 2002. Larry Lee wanted to put together a group of musicians/vocalist that would rival any national act. Their very first show was with Chante Moore, Kenny Lattimore, and Joe. Larry Lee convinced some promoter friends to put them on the show, and the rest is history. Their very next show, the following week, was with the world famous Isley Brothers. Since then Back in The Day Band has shared the bill with countless national acts.

In their home town of Detroit, Larry Lee's Back in The Day Band was the busiest band in the city during Super Bowl XL week. The band performed 7 shows in 5 days. Performances for major parties such as NFL Commissioner Paul Tagliabues' Super Bowl Party, the perfect party held by the perfect 72 Miami Dolphins, and The NFL Management Councils' private party. The band has four Detroit Music Awards nominations under its belt for the R and B band of the year, and Larry Lee was voted the outstanding urban/funk musician of the year (2006).

"Wow, this band really made our whole reception a total blast. They were just so, so good, and we got so much great feedback from our guests. They took song requests from guests, pulled guests into impromptu rapping and singing cameos, brought out the lady guests to backup dance for an awesome rendition of Rolling on the River. Fun facts about this band is that Larry Lee, the leader, is a former NFL player, and has a giant gold bass strap with "NFL" emblazoned on it."
--Wedding Wire Review

Ain't No Woman Like The One I Got - Four Tops

All Around The World- Lisa Stansfield

Been So Long - Anita Baker

Before I Let You Go - Maze

Best Of My Love - Emotions

Dance With My Father - Luther Vandross

For The Love Of You - Isley Brothers

Get Down On It - Kool N The Gang

Give It To Me Baby - Rick James

Got To Real - Cheryl Lynn

I Second That Emotion - Miracles

I'll Be Around - The Spinners

Jump To It - Aretha Franklin

Just Be Good To Me - The Sos Band

Lalala Means I Love You - Delfonics

My My My - Johnny Gill

Never Too Much - Luther Vandross

One In A Million - Lou Rawls

Roses Are Red - The Mac Band

Stay With Me Tonight - Jeffrey Osborne

Take Your Time - The Sos Band

This Is How We Do It - Montell Jordan

Through The Fire - Chaka Khan

Urn Your Love Around - George Benson

Used Ta Be My Girl - O'jays

Yearning For Your Love - Gap Band

You Are My Lady - Freddie Jackson

Fill out this form to get more information about Back in The Day Band.