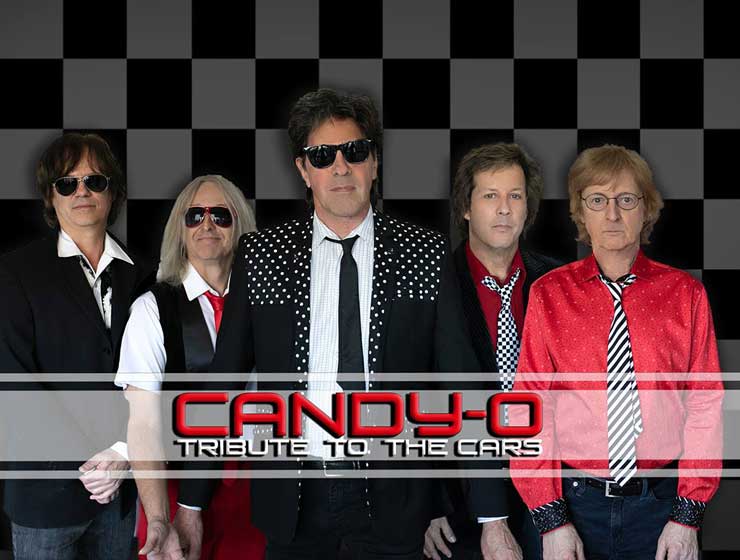 Candy O - The Ultimate Tribute to The Cars - Covering all of The Cars hits as well as some popular album cuts.

Until recently no one paid tribute to those exciting pop rockers from Boston, The Cars. Well now someone has! Late in 2001 the lead singer from Candy-O Cars tribute band was looking to put together a group that would appeal to an audience who loved the sound and total vibe of the 80's, and decided to form this ultimate tribute to The Cars. He called on a couple former band mates who were avid Cars fans and recruited two more veteran L.A. club rockers and after a lot of research and rehearsal, and Candy-O Cars Tribute was born.

Covering all of The Cars radio hits (there were 14 in the Top 20) as well as some popular album cuts, Candy-O Cars tribute captures the terminal cool of The Cars live performance in all aspects. From the lead singer's uncanny 'Ric Ocasek' looks and voice to the whole band's ability to emulate the unmistakable sound of The Cars, Candy-O band has consistently amazed and entertained crowds whenever and wherever they hit the stage. If you're not dancing and singing along to your favorite Cars hits by the end of the show, you're probably not breathing! So catch a ride to the era that was all about fun and enjoy the sound and vision of the 80's with Candy-O fun Cars tribute band!

"The Show was absolutely amazing. With Petty Theft opening to a packed house, the dance floor was packed, the music was great by both bands. It was also a treat to hear Brenton, now playing on Bass, singing 5 songs out of the 2 sets. Candy-O had the dance floor packed with every song and was truly a great time that had everyone Moving in Stereo :) Thanks for the enjoyable ride!"
--Shar

"When I was in 9th grade, I was obsessed with the Cars! Really loved them but then moved on through other music and forgot about them. I happened to see Candy-O open for Dream Police and I was blown away. All those songs came flooding back into my memory. These guys played the songs note for note perfect but with such great stage presence and enthusiasm! They renewed my love of the Cars all over again. I love them! The singer really looks like Ric O. and the guitarist plays the Elliot Easton parts amazingly - with such sheer joy! The rest of the guys were no slouches either. It was a pleasure seeing them in every way! I give them two, very enthusiastic thumbs up! If you like (or liked) the Cars, GO SEE THIS BAND!"
--Pam

"These guys are excellent!!!!They cover all the CARS hitz. Darryl is an excellent frontman, Chris can rock on that bass, MAC is no cheese on those KEYZ, Pierre has the best and fattest sticks around,and that guitar player BRENTON is superb!!!!ROCK ON GUYS!!!"
--James

"I went to see Planet 80s (which are awesome!!), and Candy-O was on the same bill. They are rather quite good. I must admit I only know the original bands hits, but this band is so energetic and lively that you could groove to songs you dont know just the same. I was at a record store in Hollywood the other day and saw one of the albums by The Cars.. so I finally got a good look at the original lead singer.. and I think Darryl looks better than him! LOL And Pierre is way too funny. I happened to be tapping my hands to the drum beat and he saw me and pointed at me with his drumstick.. way cool way cool"
--cheryl

Fill out this form to get more information about Candy O.