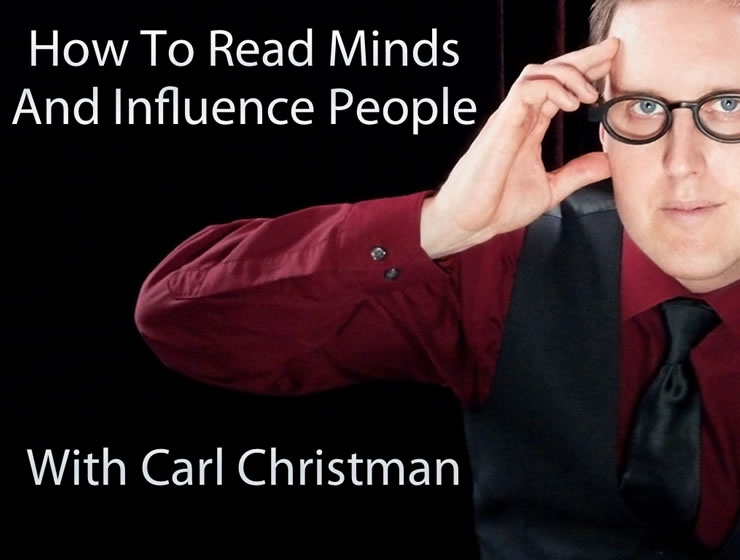 Carl Christman is a teacher, mentalist, and author of the best-selling book How to Read Minds & Influence People. Carl plays with language, psychology, and body language to entertain audiences.

Imagine hearing people’s thoughts! Now you know what it’s like to be Carl Christman. He is a teacher, mentalist, and author of the best-selling book How to Read Minds & Influence People. Carl plays with language, psychology, and body language to entertain audiences.

As a socially awkward teenager, mentalist Carl Christman became interested in reading people’s minds. As a professor at La Sierra University, a room full of students each day gave Carl Christman plenty of opportunity to play with people’s minds and hone his psychic powers. After years of study, he transcended the world of academia to become a master mentalist.

Carl is a member of Hollywood’s famous Magic Castle and The British Society of Mystery Entertainers. In recent years, he has become a remarkably popular entertainer at upscale venues and colleges across the country, where audiences marvel at his ability to get inside their minds.

"Carl was very helpful and accommodating. He worked well with my guests and was extremely pleasant. My guests were elated by his performance and he made the evening work well!"
- Kari S.

"I booked Carl Christman for a recent party and was very happy with the results. He was a consummate professional. He arrived early to the banquet hall, set up and was ready to go before most of my guests arrived. As the guests mingled he did readings for anyone who wanted. After dinner he put on an amazing show where he read the minds of various people in the audience. I would have thought it was staged if I didn’t know the people he used as volunteers. He was funny and kept the audience’s attention. I would definitely recommend Carl to others."
- Rick E.

"Carl was amazing. Everybody had a blast and couldn't believe his skill and accuracy at pinpointing their character traits. He had many people draw a picture and he was able to tell them what it was. I had to drag people away from him to let others have a chance. It really made my party special. I would highly recommend him."
- Leslie M.

"Carl was talented and very professional with everyone at the party. One of the many gifted persons. Glad to have him attend the event and I would strongly recommed him to any other event planner."
- Brandon M.

"We hired Carl Christman to perform at our annual Halloween party. He is very professional, great communication, and he arrived on time. He did a group show and then handwriting analysis for individuals. Both were fun and educational. Everyone enjoyed Carl and we would definitely consider having him at another event."
- Kathy B.

"Charming, upbeat and entertaining. We had a blast. "
- Reata R.

"Carl came to our private residence for a small birthday party for 6 adults. He was very personable an willing to be flexible with our requests. We all had such a good time. He was very engaging and open. I would definitely recommend him for other groups!"
- Carol M.

Fill out this form to get more information about Carl Christman.