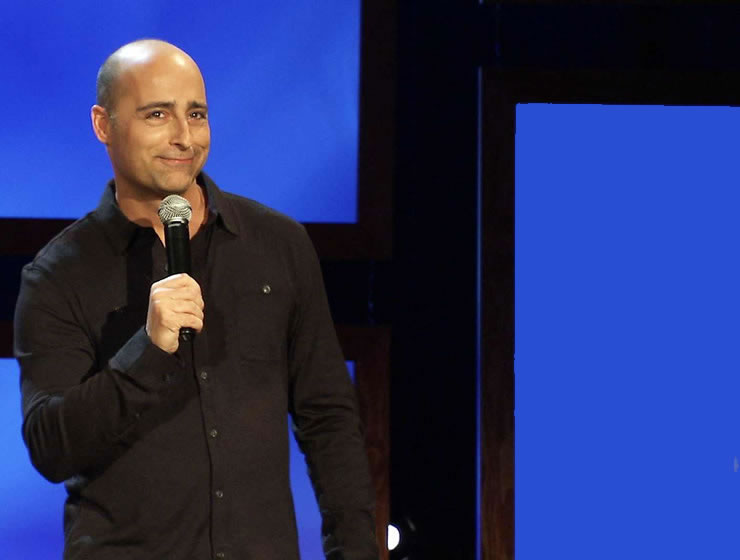 Cash Levy is a very talented improv comedian who has been seen on Comedy Central, Fox, NBC, Comics Unleashed, and is a regular at many comedy venues.

Cash Levy is a talented improv comedian who has been seen on Comedy Central, Fox, NBC, Comics Unleashed, and is a regular at many comedy venues. He can be heard daily on XM Radio, Sirius and has appeared on The Bob and Tom Show. With fifteen years of stand-up comedy expertise and national exposure, he has entertained in sold out comedy clubs throughout the country. Cash Levy is known as one of the best improvisers in the country. He uses this skill to interact with the audience, whether in a club or in front of a corporate crowd - spontaneously creating jokes specific to any event. His improv comedy includes the talent to play off any crowd. He is able to discover things about the audience and create an interactive show that leaves everyone feeling like they were included in a part of something unforgettable.

" I just wanted to send you a short note to thank you for your outstanding performance at HQ ISAF. You came in to entertain in a very challenging environment and were a true hit with the audience. The way you worked the international crowd here at HQ ISAF with on-the-spot quick and witty stand-up comedy was truly amazing. I was very impressed with your performance and am anxiously awaiting an opportunity to host you for another show in the near future. Thanks for supporting the troops!!"
- SMSgt Dan Becker (OR8), Kabul, Afghanistan

I just wanted to thank you again for the show you put on here in Kandahar. Laughter is a great stress reliever and you did a hell of a job. As I walked around talked to some of the troops the next day, they all said they had a awesome time and wished more folks would come visit. I know this isn't something that you have to do and that's why it means so much to us. It's a great moral boost for the Soldiers, Sailor's and Airmen here and I truly appreciate you coming down and performing for us!
- SCPO Stan Emerick, Operations SGMNational Command Element (USNCE)

"This was the highlight of our work retreat. Cash Levy had us rolling in the aisles, I'm sure this was an evening they will never forget."
- Hill-Rom Air-Shields, Batesville, Indiana

Cash Levy was GREAT, we LOVED HIM, everybody thought he was FANTASTIC!   He really worked well with the whole audience and it was AMAZING and very FUNNY!   Please call again in June and we will work on plans for the next event.
- Great American Group

"We appreciated your good taste in jokes, and the way you so easily interacted with our employees... This was by far the best we've had to date... Thank You for a great show!."
- Morton Salt Company

"Cash Levy made good use of the attributes of the group... evoking some memorable audience participation... we have never seen such an alert crowd pay such good attention to the after-dinner speaker.."
- International Parallel and Distributed Processing Symposium

I just wanted to again say thank you for the excellent job you did Friday night. I have heard innumerable positive comments about it, and everyone really had a great time. In particular, the spontaneity regarding kilts and dead animals has been referrenced many times! In a nutshell, the truth is that you made even me look good as a party planner!
- Sutter Medical Group

"With an audience that included elected officials of all political stripes—young and old—Cash Levy worked closely with us to craft a show that was edgy, yet not offensive. He tailored his performance in a way that the most conservative Republican wasn’t offended, nor was the most liberal Democrat snoring! His routine worked tremendously well with our diverse crowd.

Cash Levy masterfully interacted with our audience. His quick wit and extemporaneous humor was, in my opinion, the best aspect of his performance. In fact, I told C.L. after the show his interaction with one Legislator nearly made me “wet my pants.” Truly, his ability to weave his routine with audience participation was terrific.

I would recommend Cash Levy for any event. Cash Levy was on-time and on-target—we had no concerns that he would provide an outstanding show that was appropriate for our audience. Further, his ability to work with a diverse crowd of politicians was remarkable. While Cash Levy kept his act clean, he never lost his cutting humor. His routine, coupled with his impromptu comedy was classic. Cash Levy is a comedian on the rise—I only hope we can work with him again in the future."
- Kansas Cable Telecommunications Association

“Cash Levy was fun, clean, entertaining, and very adaptive to our crowd! We recommend him to any small group who is looking to have some fun, or a large group looking to be entertained. “
- Argent Mortgage, LLC

"The California Welfare Fraud Investigator’s Association held its annual training conference last month in Ventura, California. One of the highlights of this year’s conference was the dinner banquet held on October 3, 2007.  The featured entertainer was Cash Levy.

We were very impressed with Cash Levy.  Not only was he extremely funny, but he had obviously taken the time to research the duties of our law enforcement officers, the role of our association, and even the name and personality of our president.

We were pleased with your recommendation to hire Cash Levy and would recommend him to any other professional association where audience familiarity and rapport would make a difference."
- Kent Bodin, Investigator, Entertainment Chairman

“This was the best Christmas entertainment we’ve had here in my tenure, please use me as a reference for future shows. The jokes were hilarious and the spontaneous remarks even better. You seem to be able to adjust to any situation on the spot, how do you do it!? Thanks for coming and we will look forward to having you back again next year.”
Tim Mankus- Event Coordinator - Home Depot

“I wanted to send a 'Thank You' to Cash Levy for an incredible performance at Diego Garcia. I had the opportunity to see both of the scheduled shows and thought both were outstanding. Events such as these truly raise the morale of the armed forces members serving abroad and we appreciate you traveling out to perform for us.”
- Christopher V. Rudd, Capt, USAF - B-52 Crewmember

Fill out this form to get more information about Cash Levy.