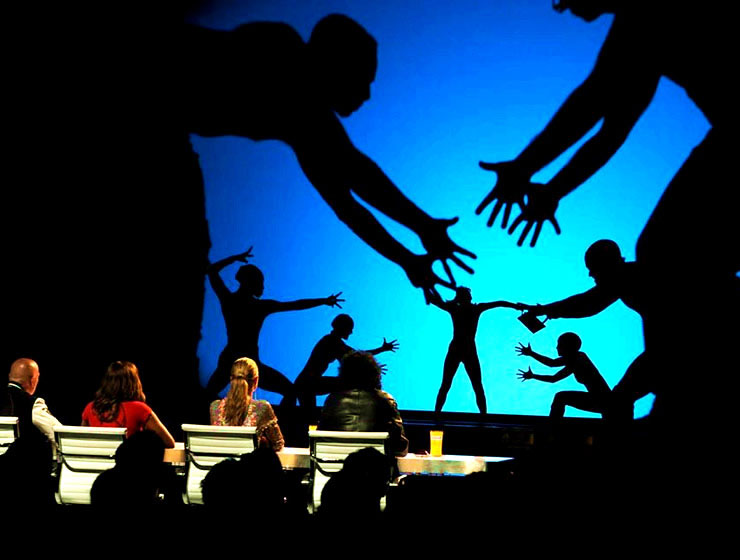 Catapult provides live shadow performances as well as HD shadow films. We offer custom creations built around your goals and messaging as well as customized performances.

Catapult is a shadow-dance company created by Adam Battelstein in 2008. The talented dancers have the skills to transform their bodies into seemingly impossible images. Catapult has made films for corporations and performed live for corporate events around the U.S. and as far away as Stockholm, Sweden. They hope their shadow dances will amaze audiences and make them fall in love with the human body and its ability to transform.

The following article about Catapult was published in The Royal Gazette, a Bermuda Newspaper, Jan. 23, 2017, regarding a show that Catapult performed for, which was booked through Blue Moon Talent:

Catapulted Into a Magical Evening by Nadia Hall

Praised for its uniqueness, it’s then unsurprising that an evening of shadow dancing was a first for me.

With no point of reference, like the dancers, I too was in the dark — Is it like mime? Is it interpretative dance?

Nothing is left open for interpretation. Accessible to all, the wordless stories transcend language delivering the message clearly and ably.

The name says it all: Catapult was propelled into public awareness when they appeared on America’s Got Talent in 2013. The US company uses acrobatics, tumbling, balance and contortions to cast shapes behind a giant screen.

A woman setting off on her travels in the first vignette, A Traveller’s Tale, had the audience gasping in tandem to the scenes taking shape. Paris, Egypt, India, China, Venice — the play on classic genres helps the narrative, as do the familiar sounds and shapes of the cities.

The Eiffel Tower, The Taj Mahal, a gondola and classic architecture are so discernible, it’s hard to believe they are bodies stacked, but — as is characteristic of shadows — the scenes are short lived.

Milestones uses a different type of landmark — the moments that take you from child to adulthood.

It is here they display best the profound emotions the art form can convey. We recognise immediately the passing from girl to woman as she hits each life event from education to getting engaged, from marriage to motherhood.

The dancers’ arms make a chapel for their wedding day; a windowed house becomes their first home; the mother’s curly head becomes the treetop for the child to swing from.

You’re often left asking, “How did they do that?”

Playing with perspective, the dancers cheat their scale using their proximity to the light, easily pitching the pair as mother and child, but not all of the tricks are so easily revealed.

The transitions are seamless. With practised fluidity, they mark the Four Seasons with new growth and in spring to a beach scene in summer; the arboreal autumn becomes a festive Christmas tree.

The calendar is a perfect metaphor for the shadow’s impermanence and vice versa. The stories move from the playful to the political — the western duel is light, The Berlin Wall adds weight.

A comical spy caper allows the troupe of eight to really show off their skill and synchronicity. As a forgetful sleuth runs to and from the house on her hunt for the jewel, she heads out the front door only then realising she has forgotten her weapon, or her map, or this or that.

Sharply rehearsed, they recreate the two scenes flawlessly as she bounces back and forth.

The helicopter with full propellers is a highlight of the show as it seems props are avoided and used only when essential.

The animals get the longer gasps. A silhouette crouches down to form a dog; they leap as an army of frogs, they contort into a flock of ostriches, blend to form a caterpillar and grow to make an elephant.

A mermaid defies logic with her disjointed arms and legs; the dancers form a bicycle for another to ride.

It is now that you realise the extent of Mr Battelstein’s imagination, which is limitless.

As if to remind the audience that it is all a trick, the dancers return to the front of the stage, unadorned, but that does not take away from the magic.

A humble “Thanks” spelled in limbs ends the show and the audience’s applause says the same.

Catapult is here as part of the Bermuda Festival of the Performing Arts. See bermudafestival.org for upcoming events.

Fill out this form to get more information about Catapult.