TR148
Blue Moon Talent, Inc.
Madonna Tribute
Chris America - Madonna Tribute Artist and Actor has had the pleasure of portraying one of the most influential, glamorous, controversial and dynamic media stars of the twenty first century
Washington, DC
USA
info@bluemoontalent.com
828-357-5537 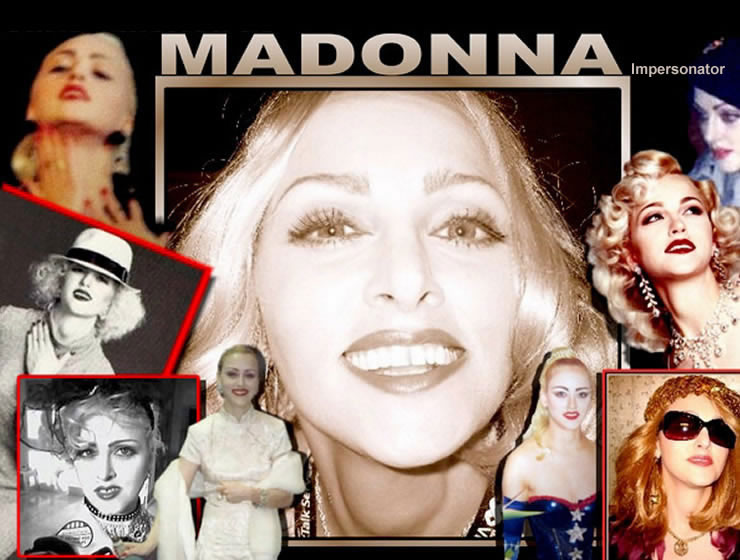 Chris America - Madonna Tribute Artist and Actor has had the pleasure of portraying one of the most influential, glamorous, controversial and dynamic media stars of the twenty first century

Chris America, Madonna Tribute Artist and Actor, has had the pleasure of portraying one of the most influential, glamorous, controversial and dynamic media stars of the twenty first century. She is so convincingly authentic as a Madonna impersonator and tribute artist, in likeness, character, stature, live vocals, dance and performance style.

Chris America doubled as Madonna at the MCI Center during the Drowned World Tour. This was for guest VIPs. She was also the facial model used as the actual mold for the face of Madonna and her figurine at The Hollywood Wax Museum. Madonna herself has commented on Chris America as a good representation.

Chris America has traveled the world performing as a Madonna Impersonator and tribute artist for private and corporate events. She has worked with celebrities like Arnold Schwarzenegger and Joan Rivers. She has also appeared for Clinton's Inauguration and the premiere of Evita, touring with the acclaimed Legends in Concert and requested by Sharon Osbourne to perform at Ozzie's Birthday Bash. Chris America8's extensive background in Television, Film, Radio, Madonna Voice-over work includes appearances on; The Discovery Channel, MTV, CNN, Sirius Radio, Jay Leno's Tonight Show, advancing to the Semi-finals in ABC's The Next Best Thing, the only Madonna look alike chosen to appear on the Oprah Winfrey Show, and starring in a Network Documentary about Madonna on the A&E.

"We hired Chris America for a corporate event and needless to say I was blown away. We have hired impersonators in the past, and TR148 was by far the best show and the easiest to work with. She definitely knows how to work the crowd. Everyone is still talking about what an amazing job she did. I would love to hire her again for future events."
--Leah W.

"It was hard to believe that someone who looks actually like the real Madonna could go two for two and sound like Madonna. The look, the personality and a identical sound of a legendary icon is hard to match. Chris America does that as only Madonna can do."
--Brennan

"You will think you are seeing the real Madonna when Chris America performs! She is the real deal. Easy to work with, professional and a first class act. You will be dazzled and entertained by her every move. She is the closest to Madonna that you'll ever get! You can't go wrong hiring this amazing entertainer!"
--Holly F.

"I had the pleasure of working with Chris America at the New York Stock Exchange. She was simply outstanding, with quality costuming and the authenticity of Madonna in perfection!! Her performance & charisma was 5 stars! and I look forward to working with her on future events!"
--Maxx Vega

"I attended an event at ABC studios in Times Square on NYE. Chris America performed some of Madonna's biggest hits and was amazing! I couldn't keep my eyes off of her - her whole look from costume and dance moves were so similar to Madonna. I hope to secure her for a corporate event this Spring. I know she'll be a hit and energize the crowd!
--Natalie G.

Fill out this form to get more information about Chris America.