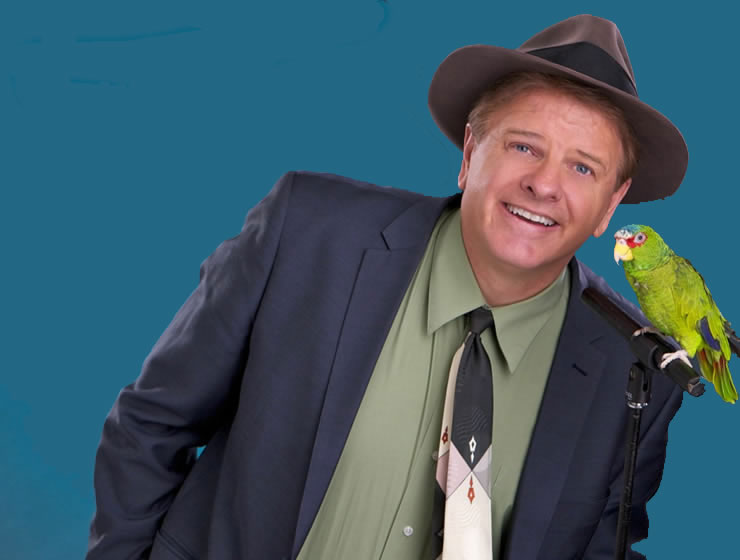 Comedy magician and illusionist Dana Daniels has been called one the funniest comedy magic acts working today. Available for corporate or private events

Dana Daniels comedy magician and illusionist has been called one the funniest comedy magic acts working today. In fact, he was the very first magician to receive the 'Comedy Magician of the Year' award from the world famous Magic Castle in Hollywood, CA. Corporations such as McDonalds and Lincoln Financial both have had Dana Daniels perform around the country for their top sales people, management and store owners. He keeps the laughs going using his trusty side kick, psychic parrot. Yes, you read correctly -- a psychic parrot!

In-between his outrageously funny gags and poking fun at magicians, he sets out to prove that his little green friend is truly clairvoyant. Together, they perform such miracles as finding chosen cards, reading the mind of somebody on a cell phone and turning a member of the audience's $100 bill into bird food only to have it reappear inside an egg laid by Luigi. (Tough trick for a male bird.) With Dana Daniels as the comedian, and Luigi as the straight bird, the duo is perfect to deliver your keynote message while performing off-the-wall magic & illusions blended with rapid-fire clean comedy and packed with audience participation.

“Comedy is hard. Magic is harder. Dana Daniels makes them both look easy. By far, the most consistently funny comedy magician I’ve ever seen. Dana Daniels is a total pro - his material is flawless, as is his magic and everyone goes out both amazed and aching with laughs.”
--Jason Alexander - Actor

“Thank you for giving us such a memorable evening and making me look so good for booking you.”
--Jamie Priestley, AirFlite Corp.

“Your show was not only hilarious but it was also an event planner’s dream to organize. I truly appreciated the flexibility you extended us.”
--Danielle Cote, Sage Software

“You delivered our key motivational message in perfect form. Following your presentation the evening’s “Buzz” was all about you. Beside a terrific laugh and good time, many people said they greatly appreciated the fact that your humor is clean.”
--Patti Londre, Dole Fresh Vegetables

Fill out this form to get more information about Dana Daniels.