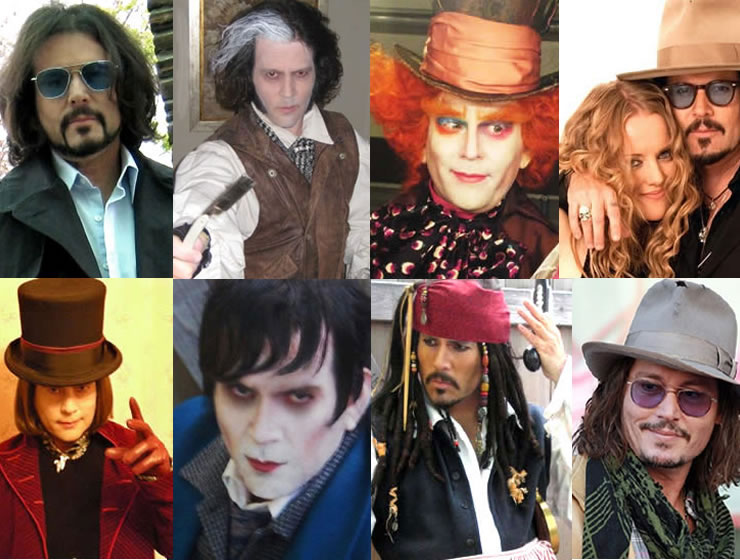 Danny Lopez not only appears at events as Johnny Depp impersonator but he can also re-create Depp's most famous movie characters: Captain Jack Sparrow, Willy Wonka, Edward Scissorhands, and others with accurate precision

Danny Lopez is a veteran of over 500 musical productions, stage plays, TV shows, films and countless live appearances. He has established a solid reputation in the world of entertainment and has been a member of the Actors Equity, AFTRA and the Screen Actors Guild since 1983. Danny provides a dead-on impersonation to what many call the world's greatest actor, Johnny Depp. Danny's eerie resemblance to Johnny Depp is uncanny and he is frequently mistaken for Johnny Depp on the street. " I've always been told that I look like Depp", states Danny Lopez. "it's a wonderful challenge to impersonate him and recreate some of his greatest movie characters for his millions of fans."

Danny Lopez not only appears at corporate, private and public events as a Johnny Depp impersonator, but he can also re-create Depp's most famous movie characters. With Danny Lopez's spot on look to Johnny and twenty thousand dollars in costumes, props, wigs and wardrobe, Danny Lopez's tribute to Johnny Depp has no equal. Entertainment Weekly reported that Danny Lopez is "an actor with incredible range".

"Danny Lopez was absolutely PHENOMENAL!!! He was THE MAD HATTER in voice, actions, and phrases. Even his dancing was true to Johnny Depp's character and the Alice in Wonderland movie. The teenagers loved him because he was truly authentic as Johnny Depp. Kids at my daughter's school are still raving about the Sweet 16 ALICE IN WONDERLAND TEA PARTY two weeks later and saying it was the best party ever. My daughter had a blast. We could not have hired a better actor! You are the BEST TR180! We will use you again and again."
--Margaret Acker

"Danny Lopez is the BEST man for the Job."
--Mae Russell, Palms Casino

"It's scary how much Danny Lopez looks like him (Depp)."
--Michelle Greene, AT&T

Fill out this form to get more information about Danny Lopez .