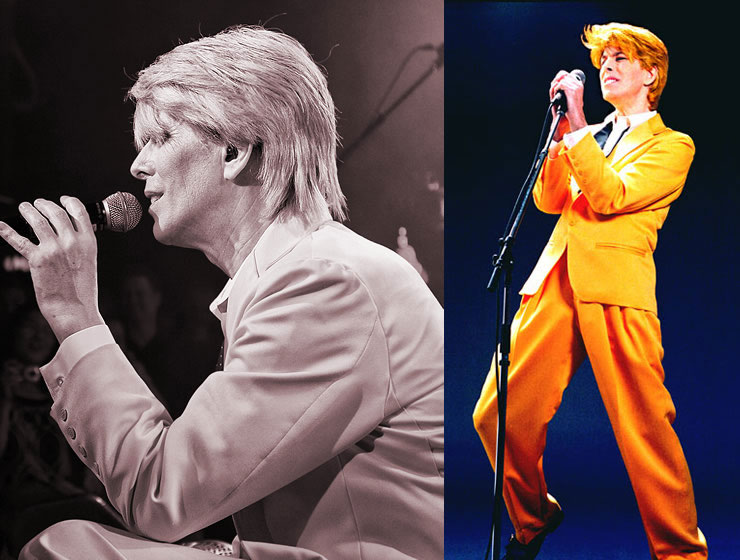 Get ready for a brilliant, live re-creation of Rock & Roll's most colorful & legendary performers... This is an astounding tribute to rock and roll's most electrifying superstar... the Legendary David Bowie. David Brighton is credited as being the world's best David Bowie impersonator and tribute performer with one of the most entertaining tribute acts ever to hit the stage. From stadium-sized Pop/Rock legend to space alien Ziggy Stardust, David Brighton and his all star band chronicle all of David Bowies Ch-Ch-Changes in electrifying Technicolor.

David Brighton's credits include performing side by side with Bowie himself in the TV commercial for Reality - David Bowie's new CD, in which David Brighton portrays many of David Bowie's most legendary personas. David Brighton also recently appeared as Bowie on VH-1 television as well as in international pop star Shakira's new concert video.

This unforgettable David Bowie tribute Show with David Brighton is complete with flamboyant costume changes, elaborate staging, perfectly emulated vocal styling and one of the best all-star backing bands in the business. All of the many faces of David Bowie are present, and so is the excitement and electricity.

"David Bowie was a great friend to myself and my dad (Tony Mascia, David Bowie's body guard). It was great reliving all those songs, just like I remembered them growing up. David Brighton is dead on as David Bowie. I was totally impressed and in awe. Thanks for a wonderful evening..."
--Gloria DeMassi

"YOU MUST SEE TR114. HE WILL FREAKING CHANGE YOUR LIFE.."
--Holly Jet Ruben

“I have seen David Brighton perform and every show is amazing…every bit as good as seeing the real David Bowie.  David Brighton is very much the showman…. It was amazing to see him work that stage... and the costumes are all top notch.  This is the reason David Brighton is one of the top tribute bands and travel all across the country to perform.”
--James Michael, Concert photographer

“I was a bit cynical. But you blew my mind. You're amazing... every nuance. Even more impressive, you're lovely. To everyone. Thanks so much for a spectacular show. Loved it! Loved you!”
--Vicki Abelson

"If anyone hasn't seen one of David Brighton's shows, you have no idea what you are missing. His shows will blow you away...”
--Michael Robert S.

"I'm a BIG Bowie fan...saw the 1972 Santa Monica Ziggy shows and every tour since.  As a life long Bowie fan it was great to see you guys....what a great show. You really blew my mind...amazing..."
--Craig Hammons.

"I was totally blown away by your truly incredible performance. The way you look, the sound of your voice, and the way you move...is just like the real David Bowie. I have seen some truly fantastic tribute bands....but I can honestly say that you are by far the best. No other tribute act can compare to you. I was completely mesmerized by your performance... you have the same charisma and intense appeal as your counterpart!"
--Natascha Novobilski

"David Brighton actually is the only chap out there capable of doing justice when simulating a force like Mr. Bowie. I know the business well, and what David Brighton does is pure top shelf impersonation. An unbelievable show good people, do yourself a favor, especially if you ever saw the man, see David Brighton walk the walk!"
--Jackson Martin, professional musician

"As I listened to the intro to STATION TO STATION and David Brighton came out as the "Thin White Duke," I didn't realize until a minute had passed that my jaw had dropped open and I couldn't take my eyes off of him. I was blown away!! I just couldn't believe what I was seeing and hearing...WOW... Absolutely loved it!!"
--Michelle G., Phoenix Arizona

"David Brighton has Bowie, DOWN - sounds like him, looks like him, moves like him... Being an old Bowie fan, I was very critical, but I'm totally taken... absolutely brilliant!"
--Joyce Hanako Bachmann

"You guys did such a great show! People in the crowd were reacting as if David Bowie was really playing for us. I'm still not sure that he wasn't! Superb!!!!"
--Fred Herrman

"There are poor tributes out there, good tributes and great tributes.... then there is David Brighton - a different class."
--Bob Wyper

Fill out this form to get more information about David Brighton.