CO137
Blue Moon Talent, Inc.
Stand-up Comedian
Comedian David Ferrell is a multi-time nominee for Comedy Act of the Year by the Inspirational Country Music Awards, sharing the honor with some of the biggest names in clean comedy!
Simpsonville, SC
USA
info@bluemoontalent.com
828-357-5537 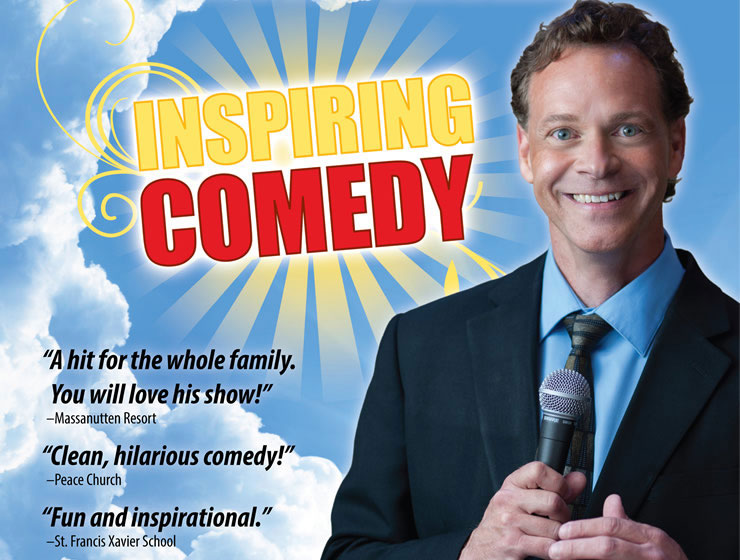 Comedian David Ferrell is a multi-time nominee for Comedy Act of the Year by the Inspirational Country Music Awards, sharing the honor with some of the biggest names in clean comedy!

For nearly 20 years, comedian David Ferrell has shown audiences that comedy can be clean and funny! Three-time nominee for Inspirational Comedian of the Year by ICM As Heard on Sirius/XM, Laugh USA. Named one of five "Hot Acts in America" by Event Solutions Magazine Comedian David Ferrell is a multi-time nominee for Comedy Act of the Year by the Inspirational Country Music Awards, sharing the honor with Mark Lowry, Dennis Swanberg, Chonda Pierce, and some of the biggest names in clean comedy! He was also named one of Five Hot Corporate Acts by Event Solutions Magazine along with "America's Got Talent" winner Terry Fator, TV Star Frank Caliendo, and the legendary Blue Man Group.

David Ferrell's performance is 100% clean and suitable for all ages and backgrounds. He has performed for numerous Fortune 500 companies such as Proctor & Gamble, IBM, Nortel, and The Gap. He has made audiences laugh at venues ranging from Trump's Castle in Atlantic City to universities and comedy clubs all over the country. Comedian David Ferrell has done several civic functions and numerous churches across the country, and is actively involved in fundraisers for schools, hospitals, and non-profit organizations.

If you need a professional comedian who will deliver laughs without offending anyone, you need David Ferrell. He is willing to take his God given talents anywhere that is willing to have a clean, positive, and funny event!

"David Ferrell did an outstanding job at not only meeting expectation but exceeding them. He was fun, funny and authentic. A real joy to work with. I appreciated his heart for the Lord and his desire to be a blessing at our event!"
--Lead Pastor, Jamestown First Assembly All Church Picnic (Jamestown, ND) 8/17/2014

"David Ferrell did a great job. Everyone enjoyed his performance. He got to the church early and was able to get everything set up and talk with many people who also came early. All went well. We were glad to have him as our entertainer for the evening."
--Treasurer, Grace Fellowship Church of God "The Classics" evening for seniors (Watkinsville, GA) 8/15/2014

"We HIGHLY recommend David Ferrell. to anyone seeking a clean and professional entertaining experience. He was very prompt and professional. D.F. is very talented, material was great and he knows how to work the crowd and never acted in a pretentious matter. He has the unique ability to adlib when needed and I heard NO negative remarks from the audience following the show. Everyone who spoke with personally enjoyed his engaging and infectious personality - a true delight to be around. His words of motivation and encouragement at the end of the program was the 'icing on the cake'. Well Done!"
--Secretary/Treasurer, West Virginia Poultry Association President's Dinner (Moorefield, WV) 7/25/2014

"David Ferrell has a wonderful program and was a hit during our Banquet. He is a very friendly person and got along great with our members during the meal time. David Ferrell was set up and ready to go when it was his time of the program. His program is very clean cut for families. I highly recommend D.F. for your next event. You won't be disappointed."
--Administrative Assistant, North Carolina Association of Electrical Contractors Annual Convention (Myrtle Beach, SC) 7/11/2014

"We were very pleased with David Ferrell He was funny, clean and very professional. I would definitely recommend him to other groups."
--Personnel Supevisor, City of Rock Hill City employees Retirement banquet (Rock Hill, SC) 6/26/2014

"I wanted to say thank you to David Ferrell for such a great performance. I heard nothing but great things from staff and residents and laughter spilling out of the room. Honestly, I had not laughed that much in a while and I thank you - as a military wife whose husband is gone more than he is here and as a mom, I needed it. It was great medicine for our residents due to the daily stressors they face."
--Resident Relations Manager, Corvias Military Living Couples Date Night (Fort Bragg, NC) 5/30/2014

"David Ferrell exceeded any expectations we had. Everything was top notch. Not only was the performance spot on from start to finish, but David Ferrell showed himself to be a class act in conversation and interaction with our team before and after the show. The way he captivated the audience's attention by relating to them through stories and kept them laughing hysterically through funny truths was spot on."
--Worship Pastor, Living Hope Church A Night of Laughter Concert (DeRidder, LA) 5/17/2014

"This event with David Ferrell was an overwhelming success! Best turnout to one of these events... 450+! The most we've had in the past was 275. Standing Ovation at the end... and I believe David Ferrell sold out of his DVD."
--Event Coordinator, Northridge Church Senior Adult Event (Plymouth, MI) 5/9/2014

Fill out this form to get more information about David Ferrell.