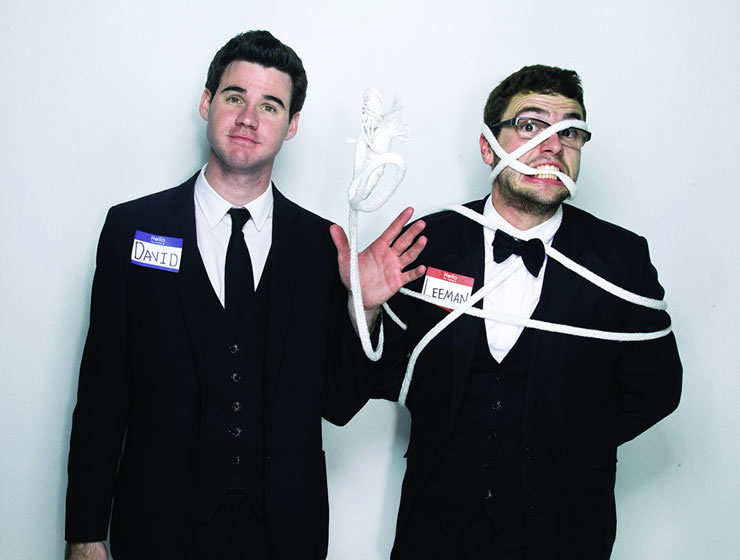 David and Leeman AWARD WINNING comedy magicians from Los Angeles. They have been called Miraculous by the L.A. WEEKLY, Incredible by the L.A. EXAMINER.

David and Leeman are AWARD WINNING comedy magicians from Los Angeles.  They have been called “Miraculous” by the L.A. WEEKLY, “Incredible” by the L.A. EXAMINER, and a “Laugh Riot” by the TOLUCAN TIMES. Their two-man comedy magic show will fascinate, fool, and inspire you to re-examine reality - and you’ll laugh all the way throughout.

In 2012 David and Leeman made their Hollywood Fringe Festival debut with their award winning show “Filthy Liars: A Funny Magic Show” - which they wrote, produced, and directed themselves. They were recognized as a“Best of the Fringe Show,” nominated for “Best Cabaret Show,” and were in the Top-10 highest grossing revenue shows in the entire festival, which had over 200 productions. Later in 2012, they took their show to the Los Angeles Comedy Festival and won the “Best Live Show” award, out of the entire festival.

In 2013, David and Leeman created their second Hollywood Fringe Festival show directed by Jon Armstrong. They were once again recognized as a “Best of Fringe Show,” nominated for “Best Cabaret Show,” and were the second highest grossing revenue show of the entire festival, routinely selling out their venues.

David and Leeman are making their NATIONAL TELEVISION debut this fall on the fourth season of “Masters of Illusion,” and are writing their third show for their 2014 international Fringe tour. Their comedy and magic is edgy, cool, and smart. And they do not own ruffled shirts.

"So much fun to watch - it was great, your presentation's great. It feels new and youthful, you guys are likable. Well done!"
--Howard Stern

"I loved your whole act. Your charisma, your delivery - it was great!"
--Mel B

"If you love magic this is definitely the show for you."
--The Examiner

Fill out this form to get more information about David and Leeman.