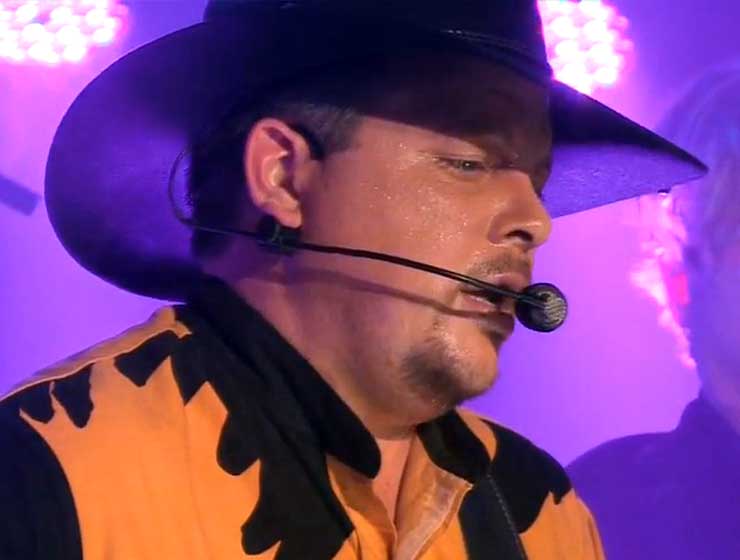 Watching Dean Simmons perform brings all the energy of a classic Garth Brooks concert. He dashes around the stage like a mad man.

Without a doubt, Dean Simmons is the top Garth Brooks impersonator-tribute artist in the country... if not the world. Combine talent, dedication and impeccable performance, and you have the recipe for how this Garth Brooks tribute artist recreates the music of Garth Brooks. Watching Dean Simmons perform brings all the energy of a classic Garth Brooks concert. He dashes around the stage like a mad man, all the while entertaining the crowd with perfect renditions of each Garth song. Often times he has to stop and remind the crowd, "I'm not him".

You might see Dean Simmons performing at NBA halftime performances, at the Ms. Universe Pageant, or at the Milwaukee Summerfest. But no matter where it is you catch this Garth impersonator's performance, this show is bound to inspire and make you wonder if it isn't actually Garth Brooks performing himself.

"An excellent performance. I do not think Garth Brooks himself would have been better.....Highly recommend!"
--Noel Silver

"Dean Simmons is an extremely talented musician, super professional and the nicest guy. It was a pleasure to work with him and he delighted our guests with his performance."
--Nikki

“Dean Simmons Tribute to Garth Brooks was just what our ‘Going Country for a Cure’ gala needed to add excitement to the evening. While performing all of our Garth favorites, Dean worked the crowd both on and off the stage. His performance was truly an asset to the event!”
--Rick Selig - Director, American Diabetes Association, Little Rock, AK

“Dean Simmons Tribute to Garth Brooks was terrific.  We asked the people who had seen Garth live.  They said he was VERY CLOSE.  They were truly impressed.”
--Christine Torch - Director of Student Activities, Anne Arundel College

“Dean Simmons has Garth Brooks' mannerisms -- his sometimes exaggerated movements, his mugging for the audience -- down to a ‘T’.  He generates a lot of electricity among the audience.”
--Jerry Fink - Las Vegas Sun

“Dean Simmons Garth Brooks Tribute Show for our community was outstanding.  Our residents complimented the look, sound and energy that Dean put into the show.  A true professional.”
--Sean Austin - It's Showtime - Del Webb/Village at Deaton Creek - Hoschton, GA

“Capping off his set with a rousing version of ‘Friends in Low Places’, he was the surprise of the night. Like Garth, Dean Simmons is high energy, yet he puts a good dose of his dynamic personality into the performance.”
--Michelle Hoffman - Arizona Republic

“I saw Dean Simmons recently in the Legends in Concert show at Lumiere Casino and, although I thought the whole cast and band were very good, I thought Dean Simmons's Garth act stole the show. Not only is his voice INCREDIBLE, he moves, and talks and even laughs like Garth. He's also very funny!  He sat down and played The Dance all by himself, and he can PLAY that guitar. It was so beautiful, it brought tears to my eyes. Then, he had us all screaming during Friends in Low Places!! I am a Garth fan, so I may be biased, but this was the best tribute act I have ever seen, of ANY character.  I know many more audiences to get to experience this act!”
--Carmen DiMarco, St. Louis, MO

“Dean Simmons’s appearance on the Legends stage at the Imperial Palace, Las Vegas was the HIT of the show! His sound and looks are astounding! As a long time Garth Brooks fan, he makes me proud and thankful that we can still share in the magic that Garth used to bring to his audience.”
--Kathy Shelby, Las Vegas, NV

“Dean Simmons's energy, presence and voice had the audience captivated!! It is hard to impersonate “The Entertainer" Garth Brooks, but Dean Simmons's connection with the audience, guitar skills, theatrics, dead ringer looks and voice allows you to just sit back and relax and enjoy the show!!”
--Susan Marie, NY, NY

Fill out this form to get more information about Dean Simmons.