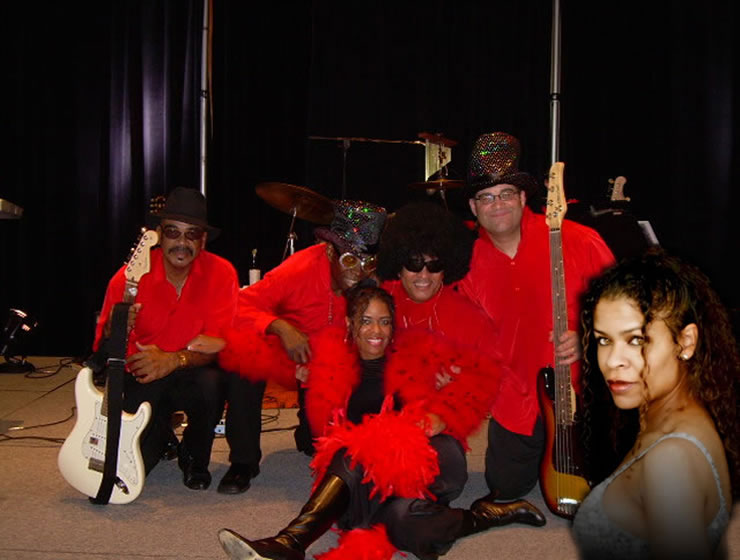 Diane Mcintosh Band has become one of East Coast's premier entertainers that is backed with a live show band. Having performed at numerous weddings and corporate events, she has become a leader in Atlanta's live music scene.

Diane Mcintosh Band. has become one of East Coast's premier entertainers that is backed with a live show band. Having performed at numerous weddings and corporate events, she has become a leader in Atlanta's live music scene, and is frequently the top choice for weddings and corporate events in the Southeast. Her specialty is providing the absolute best entertainment value with her powerful voice, signature sound and versatility.

Diane Mcintosh Band and her jammin dance & wedding dance band have become known for their ability to interact with, and wow any crowd. She places the guests as the centerpiece as she tailors each performance to fit each individual client's vision. In addition, destination weddings have become standard fare, extending her reputation into Florida, Hilton Head, the mountainous regions of North Carolina and many of the islands along the Southeast Atlantic coast.

Diane Mcintosh Band is a sought after dance band and wedding dance band that includes a Grammy-nominated singer-songwriter and her top-tier band members, who have performed throughout Europe, Asia, the Caribbean and the Mediterranean, and were voted "Best variety Band in North America" in 2007. Diane Mcintosh Band performs the "most popular dance hits of all time" in the genres of Rhythm & Blues, current and retro Soul, Motown, Jazz, Latin, Pop some classic Rock and today's Top 40 hits. D.M and her dance band will leave you with an absolute momentous and unforgettable entertainment experience at your wedding or corporate gala!

"Diane Mcintosh Band not only sounds incredible, but they have great energy. Everyone at our wedding had a blast and people were dancing all night. I can't say enough good things about D.M. and her band. If you want your event to be fun, then this is the band for you."
--Elina G

"Diane Mcintosh Band are true professionals. The planing was easy and she was very accommodating and bonded quickly with the crowd. Everything went smoothly from communications, to timely arrival and getting everyone on the dance floor. Our local country club asked for her number as they want to use her in the future. Great party band!!"
--Bill T

"Diane Mcintosh Band was a huge part of what made our wedding reception a success. We hoped for a band that would inspire everyone to join us on the dance floor and we got more than we bargained for! Their energy and talent had everyone up and enjoying themselves... guests who have never danced at a wedding before, guests that were so old they could barely still walk, and even guests in a wheelchair, EVERYONE was having the time of their life! I would like to thank them for making our evening so special. You won't be disappointed with Diane Mcintosh Band!"
--Justin B

"All I can say is WOW. The band was great, very energetic, and a blast to work with. Diane Mcintosh's vocal skills are extraordinary, the musicians were very talented, and the overall performance was superb. I strongly recommend Diane Mcintosh Band and look forward to working with them again."
--Tranae H

"The band was wonderful. Her voice is amazing and the drummer was very entertaining. All of our guests loved them and I would tell others to use them without reservation. They were energetic and actively persuaded the first of the guests to make it to the floor. After the ball got rolling, we actually had to stop the band to end the party or it could have gone into the wee hours. Wonderful job!!!!!!!!!!"
--Mary-amanda C

Any Way You Want It - Journey

Best Of My Love - Emotions

Don't Stop Til You Get Enough - Michael Jackson

Get Down Tonight - KC & the Sunshine Band

Give Me Everything - Pit Bull Ft. Ne-yo

Got To Be Real - Cheryl Lynn

I Need To Know - Marc Anthony

If I Ain't Got You - Alicia Keys

Just The Way You Are - Bruno Mars

Killing Me Softly - The Fugees

Livin' On A Prayer - Bon Jovi

Rock With You - Michael Jackson

Rolling In The Deep - Adele

Shake Your Body Down - Jacksons

Shook Me All Night Long - ACDC

This Will Be An Everlasting Love - Natalie Cole

We Are Family - Sister Sledge

What A Wonderful World - Louis Armstrong

Fill out this form to get more information about Diane Mcintosh Band.