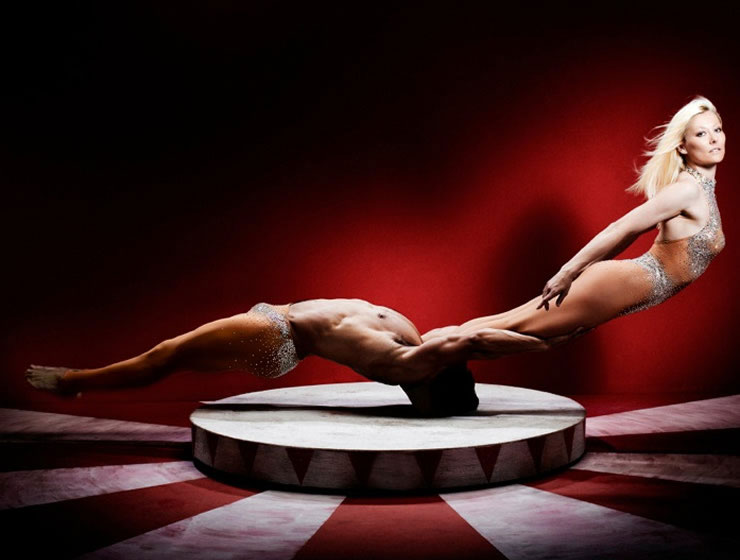 Donovan and Rebecca have appeared on America's Got Talent and have performed Internationally for TV, corporate and private events.

Donovan & Rebecca are a self-taught acro-balance and aerial act from Long Island. Prior to becoming Guinness World Record holders for their acrobatics, R. worked as a model in Paris, Aruba and London, as well as a showgirl at the Moulin Rouge in Paris. D. studied musical theater in New York City and performed as a singer and actor internationally.

Act name: Aerial Cube Type of Act: aerial & musical acrobatics Act Description: dj sings up to Rebecca as she hangs and contorts gracefully, inside and out of a gleaming cube… as he lifts her off the cube, they begin a beautiful adagio duet culminating as he in turn climbs onto the cube, and they soar into the air, hanging impossibly from each other’s necks.

Act name: Tissu Type of act: aerial acrobatics Act Description: A sensual belly dance to the percussive rhythms of an intoxicating Indian fusion sets the tone for this romantic and dangerous aerial duet on silks. With effortless grace and flexibility, Rebecca soars into the air. Donovan answers with a solo display of strength finally pulling her up into the air culminating in a romantic and heart pounding embrace.

“I mean, you truly are...not only great entertainers, and great athletes but, there’s so much emotion, and such passion in what you do.  I mean,  you can sense the love...”
--Howie Mandel, America’s Got Talent

“You’re an amazing act!  I’ve said it from the beginning!  Your strength...  The two of you are a beautiful couple to watch!  Bravo!  Well done!  You guys are tremendous!
--Howard Stern, America’s Got Talent

“I love you too!...Every time we see you you do something completely different, and I really respect that!
--Sharon Osbourne, America’s Got Talent

Fill out this form to get more information about Donovan and Rebecca.