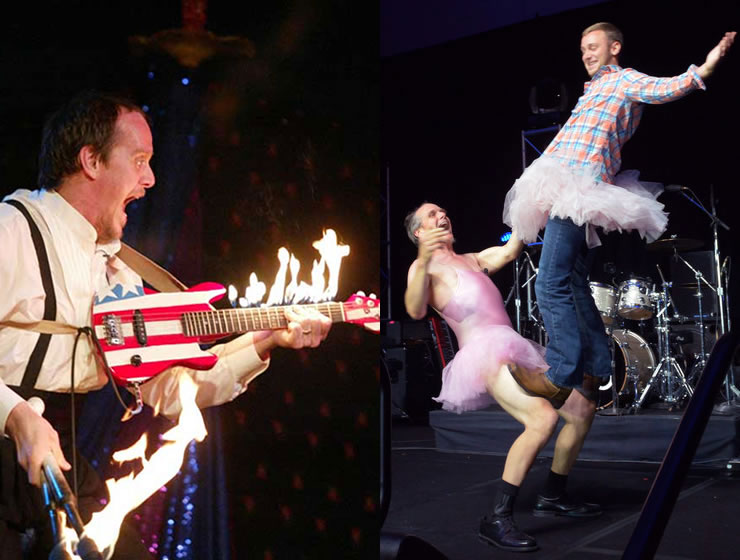 Frank Olivier developed his unique off-beat brand of humor in San Francisco starting off on the streets entertaining tourists, and quickly moving into the Bay Area's numerous comedy clubs. He was soon sharing the bill with Dana Carvey, Robin Williams, Whoopi Goldberg, and others. Completely delight your crowd with an upbeat hilarious top-tier, self-contained, and clean comedy juggling show with world-class skills including award-winning juggling, magic, unicycling and more. The thrills can even be interactive to literally bring your guests centerstage. Frank Olivier can create customized comedy to enhance your message or theme and the "outrageousness" factor can be adjusted to suit your event.

Frank Olivier is Available for: Headline Comedy - Frank Olivier is predictably unpredictable and consistently inspired featured entertainment. Emceeing - Unify all the elements of your program and keep things moving. Frank Olivier sets the pace and keeps everyone laughing.

Spoof Speaker Presentations - Frank Olivier's introduced as an expert on a pertinent subject. Sit back and watch the fun begin. Morning Meetings - Get the morning started with Frank Olivier. He will energize the room, focus attention and raise productivity. Product Launches - Frank Olivier will work with you to create a unique and quirky customized launch. Trade Shows - Bring in Frank Olivier to attract big crowds and hundreds of qualified leads. With over 20 years in the business and literally thousands of shows, Frank Olivier delivers a memorable and one of a kind event.

"IBM has an in-house rating system for all their events, and the Florida circus theme event, with Frank Olivier, was one of the very few shows ever to rate a perfect 10."
--IBM

"Wickedly funny! The program's only problem was that it should have run the rest of the summer! Astonishing juggling and unicycling feats… a sharp-witted ingenuous buffoon!"
--Jennifer DunningNew York Times

"When Frank Olivier is juggling, no one can touch him, not just for his mind-bending skill, but for his perfectly honed awkward-guy appeal which gets audiences roaring. It's a delightfully wild ride."
--Brad RosensteinS.F. Bay Guardian

"Comedy at its absolute best! Frank Olivier is an energetic, multi-talented, masterful comedy performer who can do it all…The funniest show I've ever seen. It's unbelievable!"
--Jerry FriedmanKGO Radio

"Certainly the funniest juggler you've ever seen! The rightful heir to the comic tradition of vaudeville. A showstopper!"
--Washington Weekly

"Frank Olivier, like a slightly bent variety arts chef, cooks up a blend of entertainments into a wildly funny show. It's one of those shows that works so perfectly wonderfully you're surprised no one had come up with it before."
--Pat CraigContra Costa Times

Fill out this form to get more information about Frank Olivier.