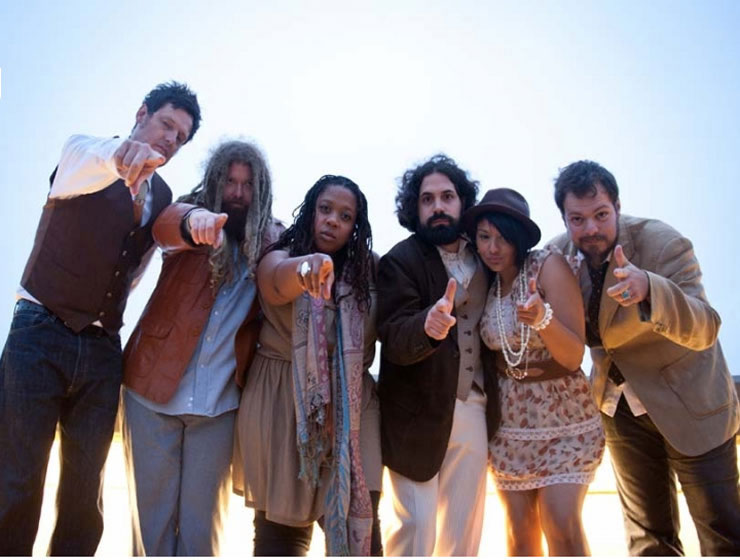 Since 2011, Hot Einstein have kept dance floors packed from coast-to-coast with their clever mix of classic and current tunes.

Since 2011, DHot Einstein have kept dance floors packed from coast-to-coast with their clever mix of classic and current tunes. With scintillating vocals and commanding instrumental prowess, Hot Einstein injects excitement and fun to fundraisers, weddings, and corporate events.

Formed on tax day, 2011, Hot Einstein is the result of five musical personalities pushing each other to new creative heights. Gathering influences far and wide—from vintage Bowie to King Curtis to Nina Simone to Led Zeppelin—Dance Band DB199 began with Matt Berkeley’s primordial urge to form a rock and roll band. He states: “We feel that Rock has strayed to far from its roots in rhythm and blues, as Nick Lowe said… it lost the Roll somewhere along the line.”

"We had Hot Einstein play our wedding in August and they were fantastic. They were really flexible with our schedule during the whole day and Matt was really responsive to all questions I had leading up to the event. They learned two songs for us for our first dance and father/daughter dance. They are all such good musicians and had the dance floor going all night long. Closed with The Weight and American Girl - it was awesome. Couldn't have been happier with them!"
--Andrew, Wedding Wire

"Hot' doesn't begin to describe this? new band, I'm really impressed and have no doubt that this group of incredible musicians will hit it big!"
--fervant YouTuber - YouTube

"I was already a big fan of Hot Einstein before our wedding. They are a super-talented group of musicians that are among the best the Bay Area has to offer. I am particularly a huge fan of one of their vocalists, Karyn Paige. They were super-responsive and really easy to work with, They asked for my input on song selection, and were able to accommodate my requests for everything from Prince to Hava Nagila! They were completely fantastic and all of my guests had a blast. One of my favorite songs is a Hot Einstein original, written by Matt Berkeley: "You Know I'll Always Love You." We chose the song for our first dance, and even choreographed a little dance to it. They truly provided an outstanding performance, and made the event unforgettable!"
--Rachael, Wedding Wire

"Extremely professional and courteous. Guests were having a great time and the couple was extremely happy with Hot Einstein's services."
--Wedding Wire

"These guys are great! We got married June 19th, 2011 at Casa Larga Vineyards. Hot Einstein exceeded our expectations throughout our interaction with them. Before the wedding, they were attentive and responsive to our wide-ranging questions and requests. The band showed up on time and conducted themselves professionally throughout the event. We also greatly appreciated how the band dealt with our inept wedding planner and shifting time schedule. I'd highly recommend Hot Einstein for any event as they truly made ours outstanding."
--Wedding Wire

"Hot Einstein ROCKED. The dance floor was packed the whole night I never wanted to leave! Dealing with Matt was always easy and couldn't be more professional. They were extremely flexible, even when dealing with our other vendors and coordinating setup times and other details. Music is very important to us and our friends and family, and we saw this as a priority when planning our wedding. I was relieved when I realized this immensely important factor was also going to be the easiest aspect to arrange! Every member of Hot Einstein was incredibly talented and together they really brought down the house. Their range of songs was great, and they were even flexible on the fly when I asked for the father daughter dance to be abbreviated since my dad hurt his foot the day before. Anyhow, pick Hot Einstein - you won't be sorry. The last song, Tom Petty's American Girl, actually ended with an epic group hug of 50 people on the dance floor. Enough said."
--Julie, Wedding Wire

Back in the USSR - The Beatles

Come Together - The Beatles

To Love Somebody - Bee Gees

Benny and the Jets - Elton John

Late in the Evening- Paul Simon

Runnin Down A Dream - Tom Petty

Burning Down the House - Talking Heads

Brass in Pocket  - The Pretenders

Everybody Wants To Rule the World - Tears for Fears

Head Over Heels - Tears for Fears

Middle of the Road - The Pretenders

One Way or Another - Blondie

Pump It Up - Elvis Costello

Rock With You - Michael Jackson

Take Me To the RIver - Talking Heads

Train in Vain - The Clash

Wanna Be Startin’ Something - Michael Jackson

All I Do - Stevie Wonder

Do I Do - Stevie Wonder

I Was Made To Love Her - Stevie Wonder

I'll Be Around - The Spinners

Living for the City - Stevie Wonder

Sing a Simple Song - Sly and the Family Stone

Tell Me Something Good - Chaka Khan

Yes We Can Can - Pointer Sisters

Hip-Hug Her - Booker T and the MGs

All the Things You Are - Hammerstein and Kern

Hip-Hug Her - Booker T and the MGs

In a Sentimental Mood - Duke Ellington

Someday My Prince Will Come - Morey and Churchill

There Will Never Be Another You - Warren and Gordon

What Is This Thing Called Love - Cole Porter

Fill out this form to get more information about Hot Einstein.