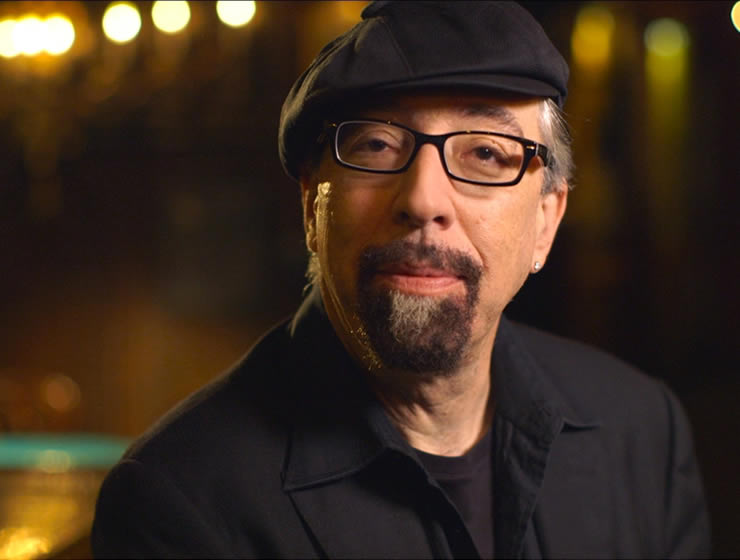 An acclaimed master of the challenging art of sleight of hand, Jamy Ian Swiss has performed magic throughout the United States for presenters ranging from Fortune 500 companies to the Smithsonian Institution.

According to the kings of irreverent magic, Penn & Teller, “Jamy Ian Swiss makes one understand what a terrifying art form pure sleight of hand can be. He is James Bond with a deck of cards for a pistol.” And in a lengthy profile in The New Yorker, Adam Gopnik writes, “Swiss is thought to have one of the most masterly sleight-of-hand techniques in the world today… like seeing Yo-Yo Ma …”

An acclaimed master of the challenging art of sleight of hand, Jamy Ian Swiss has performed magic throughout the United States for presenters ranging from Fortune 500 companies to the Smithsonian Institution. His show of pure sleight-of-hand magic, “Close-up in Concert,” ran successfully for six months at the famed Rainbow Room in New York City; his theater show, “The Honest Liar,” was part of the 2000 New York International Fringe Festival; and he has brought his show “Heavy Mental,” a program of mind-reading and “mentalism,” to cities from New York to Chicago, Austin to San Francisco. And he is a co-producer of New York’s longest-running Off-Broadway magic show, Monday Night Magic, created in 1997.

Jamy Swiss has made television appearances in the United States, Europe and Japan, including U.S. appearances on The Late, Late Show with Craig Ferguson, CBS 48 Hours, PBS Nova, and repeat appearances on The Today Show. Behind the cameras, Swiss has produced and written for television including Penn & Teller’s Sin City Spectacular (writer/producer); The Virtual Magician, which aired in 47 countries (head writer/co-director); and the Discovery Channel special, Cracking the Con Games (creator/producer). He also serves a consultant and magic designer for feature films and television.

An expert in all manner of deception, Swiss has lectured to magicians in 13 countries; to scientists and academics on “The Illusion of Psychic Powers”; to prosecutors and police agencies about con games and street scams; and to casino industry executives about cheating at card games.

"Swiss is widely thought to have one of the most masterly sleight-of-hand techniques in the world today!"
--The New Yorker

"I like him! I like him a lot!" - Craig Ferguson, The Late, Late Show"Don't miss astonishing magician Jamy Ian Swiss!"
-- Vanity Fair

"Jamy brought a different perspective and focus to our conference. Once he made the decision to speak and host our Film Festival, he engaged with us fully in every way and actively looked for ways to participate and enhance our event. He made it his personal project to research not only our conference, but our entire industry and was at times more informed than we ourselves were. Jamy has incredible attention to detail, a great passion for his art, and can be counted on to deliver a sensational performance."
--Flash Forward Conference

"Jamy Ian Swiss is brilliant: one of the supreme virtuosos of magic, a great scholar, and able to thoughtfully relate it to the worlds of business. His presentations at the EG have been simply stunning."
--Michael Hawley, producer, EG: The Entertainment Gathering

"Jamy Ian Swiss was one of the most popular speakers we've ever had at the GEL conference. His presentation blended themes of marketing, design, history, psychology, performance, and ended with a custom-built experience that brought together a central takeaway of the entire event."
--Mark Hurst, producer, GEL conference

"This quintessential showman amazes us with his sleight of hand. Pulling people from the audience, he doesn't just have them pick a card, he has them think of one … a world expert on magic that truly entertains and boggles the mind as he practices 'expert sensory deception.’"
--Broadway.com

"Swiss's act was based on a number of card tricks, sleight of hand, and paranormal trickery that were beyond comprehension. His abilities of mind-reading and deception threw the audience into absolute disbelief. Using audience participation as a driving force for his act, Swiss used his unique abilities to astonish those fortunate, or unfortunate, enough to fall victim to his ability."
--Washington Square News

"The evening's entertainment not only captivated and delighted the delegates, but also amplifed the important messages from the previous days’ meetings. The tailoring and quality of your spoken presentation was exemplary, and is reflected in the top marks your work received in the conference feedback survey."
--Schlumberger Limited

"Then it was time for the last act, Jamy Ian Swiss, another member of the Monday Night Magic producer team. He pretty much promised to lie all night, then went ahead and did it, with an hour's worth of card tricks that held the audience rapt. 'I just want to say that it's been really fun lying to you tonight,' he announced after his final feat. 'After all,' he added, 'if you believed all this, you wouldn't be an audience. You'd be a congregation.' True – yet after the show, they seemed like a congregation. The room was now brimming with believers."
--Gannett - The Journal News

"His card and coin magic were seamless … dazzling!"
--TimeOut NY

"The wonderful host of [Monday Night Magic, was] Jamy Ian Swiss … to me, this self-described 'honest liar' was worth the ticket price alone!"
--Backstage

"Jamy was a vital component in the success of our design conference. His ability to educate, entertain and challenge the thinking of the audience was unprecedented. Two months later and people are still referencing his talk. Magic, User Experience, Edward Tufte, Humor — how could any of this hang together and remain coherent? Well, Jamy made it all work seamlessly, and at a level that challenged the audience to think beyond their everyday world. He was a high point of our conference."
--Intuit

"I never saw anything like that! That was a sick trick!"
--Annie Duke, World Champion Poker Player

"Our afternoon with Jamy Ian Swiss gave the top creative staff at Electronic Arts a lot more than they bargained for. Jamy's passion for art — and passion for craft — are inspiring, and in particular his insightful connections between narrative and his own art cut to the core of some of the key creative questions in video games. Ours was a tough audience and he did not disappoint."
--Electronic Arts

"Swiss delivered from the moment he arrived. He drew a great crowd and kept them on the edge of their seats. A consummate performer!"
--University of Michigan, Ann Arbor

"Many of our guests made a point to let me know how much they enjoyed your performance … a tremendous promotional tool … Your performance gave life to what otherwise may be have become another drab business cocktail affair.!"
--WTHU AM, Maryland

"Not only did you thoroughly entertain most of the 2800 guests with your unique style and creative presentation, but you left lasting impressions."
--Bay State Insurance

"I’ve got to tell you, I couldn't keep the Three of Diamonds out of my pocket. This guy is great … a great performer. He held the crowd spellbound!"
--Woodstock Times

"Professional magician Jamy Ian Swiss, who describes himself as "an honest liar," is one confirmed skeptic with a finely tuned sense of the absurd."
--The Washington Post-Style

"Dizzying routines that will make your jaw drop!"
--Citysearch.com

Fill out this form to get more information about Jamy Ian Swiss.