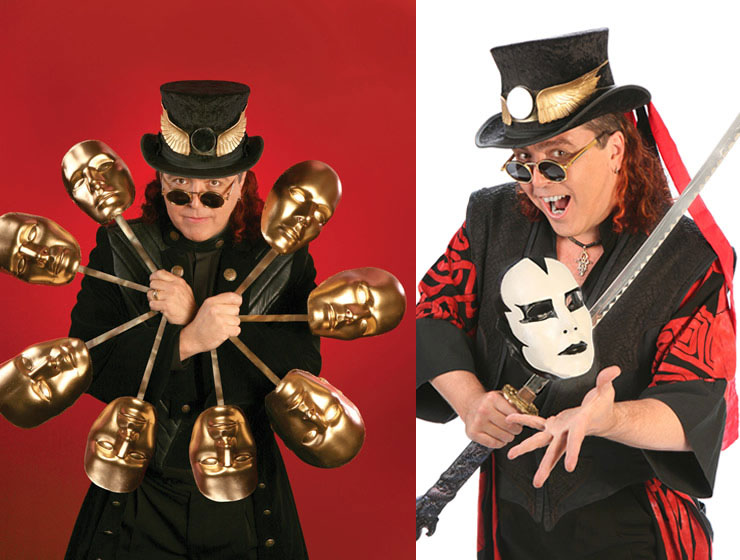 His first full-evening show, won acclaim Off-Broadway and on national tour, as well as at arts festivals in Barcelona (for the 1992 Olympics), London, Hong Kong, China, and Bangkok. Prior to going solo, he was the opening act of choice for Tina Turner, Diana Ross, and other top stars. He has been profiled in Elle Magazine, Town & Country, and dozens of other publications worldwide.

In addition to Jeff McBride's work as a performer, this illusionist is a much sought-after lecturer and workshop leader for such diverse groups as The Smithsonian, The Disney Institute, the International Brotherhood of Magicians, the Center for Symbolic Studies and others. Founder of his own magic school, he is an accomplished creative consultant, teacher and lecturer, in addition to his amazing capabilities as a performer.

Jeff McBride continues to travel the world performing and teaching, building an extensive network of contacts in the magic, performing arts, corporate theater and academic worlds who share his enthusiasm for all things magical.

"It's one of the most stunning and incredible illusions you can imagine. Acclaimed magician Jeff McBride rolls up his sleeves to his shoulders to prove there is absolutely nothing there at all. Then hundreds of  playing cards individually appear from his fingertips, pour from his mouth and race from his arms and elbows. He then flicks them at Guinness Book of World Records speed so fast they actually bounce off the floor…. It's not just mind-boggling -- it's mind-numbing."

"And that’s just one of the absolutely amazing, electrifying feats of high-skill theatrics that Jeff McBride pulls off at his brand new Magic at the Edge show he debuted this past weekend at the Palace Station."
--Robin Leach

"The magician… frames his illusions with elements of Japanese Kabuki theater and mime. McBride turns the coziness of the Sound Trax club to his advantage with close-up illusions, staging them with theatrical lighting and music. Charming -- refreshingly original!"
--Mike Weatherford - Las Vegas Review Journal

Las Vegas magician Jeff McBride offers a magic show with a twist — after each performance Friday and Saturday night at Palace Station, the 150-seat showroom turns into the “after show,” billed as Jeff McBride’s Wonderground…, features celebrity guest magicians, performance artists, uncommon variety acts, a psychic sideshow, celebrity interaction — and a dance featuring DJ Leo Diaz. Jeff McBride is one of the most creative magicians around.

When he toured Japan at age 16, he became fascinated with Kabuki Theater and has blended it into the show. He creates some amazing routines with fast-paced mask changes, which become a form of magic in his hands — said to be among the fastest in the business. MJeff McBride’s specialty is sleight of hand, and his show does not disappoint. The production is more than magic; its art and interaction. He seems to have as much fun as the fans.
--Jerry Fink - Las Vegas Sun

"Jeff McBride’s show dramatically incorporates so many wonderful elements: Japanese kabuki theatre, costumes, martial arts, dance, mime, music, sleight of hand, the clever use of masks and fans, as well as fun interactions with the audience and a young volunteer. Combined, they create an utterly different and mesmerizing experience. You need to discover Jeff McBride’s amazing display of magic for yourself. If you love magic, do not miss his show at Palace Station. The charismatic and talented magician is bound to surprise you with his distinctive style, delivery and content, a rarity that is hard to match.
--Judy Thorburn, Entertainment Reporter/Film Critic Las Vegas Tribune

Fill out this form to get more information about Jeff McBride.