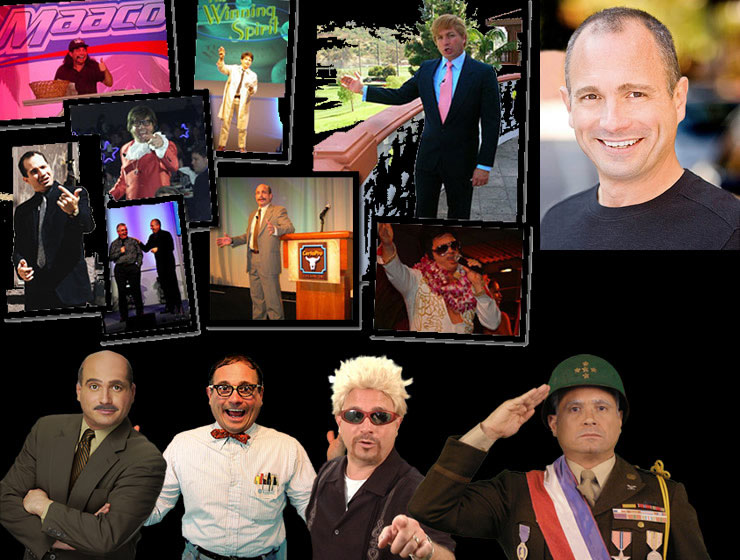 John DiDomenico's viral comedy videos have been seen by many thousands of people, garnering rave reviews and comments.

Impressionist John DiDomenico is one of the busiest corporate entertainers in the U.S. His powerful, customized content-driven comedy, as emcee, game show host, presenter, or as a cast of hilarious celebrity and original characters, is expressly chosen to exceed the expectations of your event. John DiDomenico has performed his celebrity impersonations for corporate audiences all over the world, and been seen by millions in the Fox feature films Meet The Spartans (as Donald Trump) and Disaster Movie (as Dr. Phil & The Love Guru).

John DiDomenico's hilarious Austin Powers impression has been recognized as the best by People Magazine. John DiDomenico's viral comedy videos have been seen by many thousands of people, garnering rave reviews and comments. His mission to bring the right blend of experience, talent, creativity and reliability has led him to an amazing array of events, life experiences and outstanding performances. John DiDomenico's passionate approach to making any and every event spectacular, meaningful and memorable delights clients around the globe. To ensure the success of your next national sales meeting, corporate event, product launch or trade show.

"I needed someone for my Husband's 50th birthday for a tasteful roast John was organized & professional. This was the first time I hired an impersonator & didn't know what to expect. He sent me a questionaire to send out to my family/friends. He was very accomadating to the people who turned the questionaire in late. John DiDomenico showed up early & prepared. He had the whole crowd laughing and we were amazed how he utilized the questionaire info, it was perfect. Everyone wanted a picture with Austin Powers. My husband loved it and stated "that was Austin Powers". I highly reccomend John DiDomenico for any event. He was great to work with, trustworthy & prepared!"
--Sally L

Fill out this form to get more information about John DiDomenico.