MA101
Blue Moon Talent, Inc.
Magic & Variety Show
Justino and Daniela have taken their magic show into the next generation with high energy and a unique style, above and beyond that of traditional entertainers.
Eaglewood, FL
USA
info@bluemoontalent.com
828-357-5537 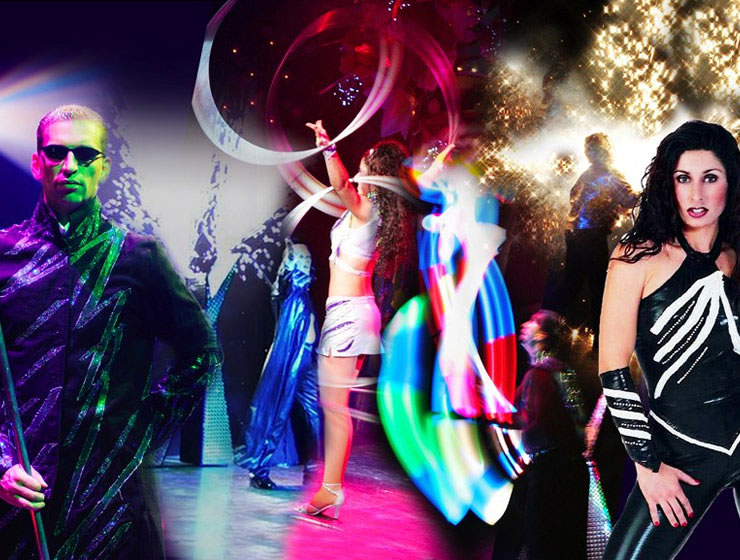 Justino and Daniela have taken their magic show into the next generation with high energy and a unique style, above and beyond that of traditional entertainers.

Justino and Daniela are two of best international magic and variety performers currently in the industry. Coming from a very long line of magic entertainers, Justino and Daniela have taken their art into the next generation with high energy and a unique style, above & beyond that of traditional entertainers. The next level of magic show. Justino and Daniela's magic show will transport you on a journey thru the best of Vegas variety acts with something for everybody! Combining dazzling props, elaborate costumes, grand illusions, extreme balancing, hilarious comedy, and aerial stunts, all highlighted by a heart pounding digital soundtrack and incredible special FX.

This unbelievable magic and variety act will surely amaze you, as they spin Hula Hoops, Triangles, and a Giant Slinky in ways you never imagined were possible! Justino and Daniela completely break down the barriers of traditional juggling & illusions, and take this performance into the future with an adrenaline surging style, high tech special effects and pyrotechnics along with cutting edge equipment. The audience will be transported through a heart pounding magic entertainment adventure! This magic performer & illusionist is the world's only firework juggler and will have you on the edge of your seat!

“Iv’e been to Vegas many times and your show blew away Chriss Angel! Justino and Daniela are the Best Illusionists I have ever seen! Your shows was amazing and well deserved the 3 standing ovations you received!  Well Done... & Thank you!"
--William Gerard

“The show was absolutely incredible,  the tricks were mind blowing and awesome to watch! The humor that Justino and Daniela added was great and made the show that much better! It was nice to get to talk to Justino and Daniela after, you were both very friendly and nice to talk to, thanks for doing such a great job!”
--Craig Mackenzie

“I wanted to tell you your show is just fabulous. Every show brings a new twist and the stunts and magic tricks are great. The colorful outfits just dazzle and light up the stage. Just amazing how you can do some of those stunts! We loved it and your comedy is just to die for. Were still laughing, the week we were there was the best vacation we ever had and your shows made it even better. Thanks so much.”
--Manny Gomez

Fill out this form to get more information about Justino and Daniela.