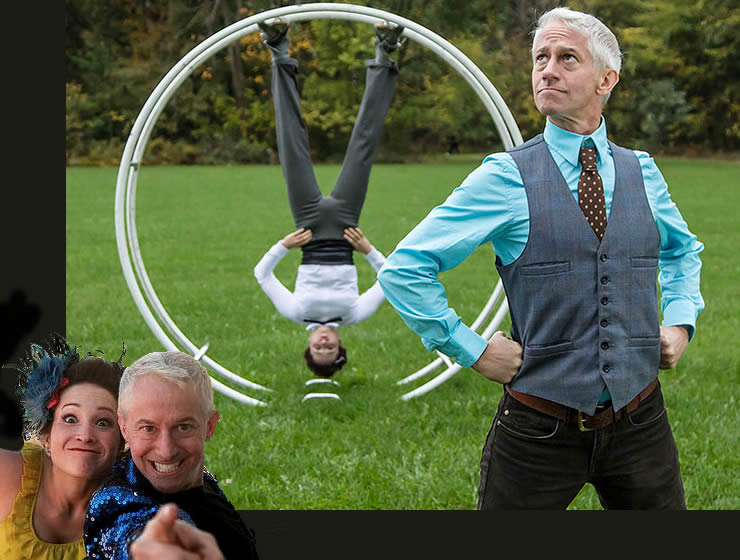 The Kamikaze Fireflies is a high energy variety show that blends big skills with gut busting laughs. With four Guinness World Records and a standing ovation on this last years America's Got Talent, this is an act that will leave make any event a memorable one.

Rob Williams and Casey Martin perform their show, Kamikaze Fireflies, for audiences all over the world at venues such as performing arts centers, corporate events, cruise ships, colleges, busker festivals, and renaissance festivals. The show is a mix of comedy and circus. Juggling, hula hoops, german wheel, whip cracking, and many tricks never seen anywhere else. The Seattle Times said they gave a "near riotous end to the show." On America's Got Talent  they received a standing ovation and Howard Stern said, "Fantastic. Captivating. You're funny. I was sucked into this thing. It was wonderful. I can't wait to see more."

"Fantastic. Captivating. You're funny. I was sucked into this thing. It was wonderful. I can't wait to see more!"
-Howard Stern

"A near riotous end to the show!"
-The Seattle Times

"It was dangerous. It was exciting. It was funny!"
-Howie Mandel

"OMG!! They were amazing! I heard person after person say how funny and exciting the show was. They loved the audience interaction, and kids and adults alike were on the edge of their seats. A group from 30 minutes away who had never attended one of our events before said that it was worth the drive and that they would be back for future shows!"
-- Adam Wheat - Theater Director and Coordinator, Ouachita Baptist University

"I had the pleasure of seeing this act 3 times last summer at the Larkspur Renaissance Festival in Colorado; their show was always SRO! The shows were amazing...Not only was the material "fresh", the rapport between the performers was electric!"

"... I would highly recommend this act to anyone who wanted to see amazing acts of acrobatics and juggling paired with humor and style!!!"
-Yelp Reviewer

Fill out this form to get more information about Kamikaze Fireflies.