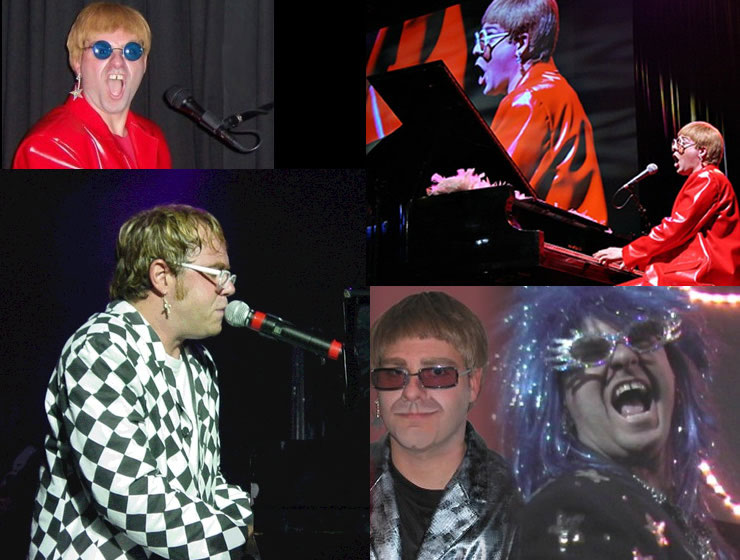 Live singing and piano playing sets his show apart from all the rest. As one of the top rated Elton John tributes in the world, Lee Alverson is the only Elton John tribute artist who performs and sings his Elton John tribute with authentic costumes, life-size baby grand piano, lighting and effects. All done in a LIVE performance covering three decades of Elton John's career music, costumes, movement, and ever-changing appearance. Lee Alverson looks, walks, talks, and sings just like Elton himself! He is quickly becoming one the the top tribute Artists in the world. Regularly featured in the stage productions: Superstars in Concert, Legendary Superstars, Starz on Stage, and British Legends.

Lee Alverson performs over 175 shows a year for clients such as Coca-Cola, Homeland Security Director, Tom Ridge, US Airways, Verizon, Bayer, and American International. In addition, he has opened for superstars, such as, Barry Manilow and the Beach Boys. He also continues to perform at festivals, casinos, fairs, and other corporate functions across the country.

"It was an absolute pleasure working with you! Your professionalism and attention to detail were remarkable! Your Elton John vocal performance was INCREDIBLE! You sounded just like the real Elton John! I can't thank you enough for contributing to the success of our Hollywood Party and the overall success of our Top Achievers event! I look forward to working together in the future!"
--Sandy Ellison, Intel Americas, Inc., Puerto Rico

"Our guests continue to rave about Lee Alverson's performance as Elton John! His creative talents and showmanship lifted our wonderful celebration into the realm of unforgettable."
--Dr. Jerid and Allison Fisher, New York, NY

"WOW! That was the most amazing surprise, Elton playing at my birthday party complete with a red piano! All my friends are still talking about it. What an unbelievable entertainer and piano player."
--Betsy Wiersma, Creative Event Development, Denver, CO

"I can’t tell you how impressed I was with you as performer & Professional businessman. I knew you would be easy to work with from our first conversation"
--Joe Rigotti, Accent on Cincinnati, Inc., Cincinnati, OH

"You are the greatest piano player I have ever seen!"
--Alan Travaglini, CEO of Sanray Corporation, Meadville, PA

"If it was up to me, I would book you for every event!"
--Linda Granett, Corporate Events Manhattan, Manhattan, NY

"Hire this man for any event and let him take it from there, the audience will love him!"
--Charles Funk, MI Theaters, New Orleans, LA

"Your performance was awesome & you are a true Pro." Great working with you and we look forward to the next one!"
--John McConnell, Executive Producer, Book It Inc, Universal Studios, Fl

Fill out this form to get more information about Lee Alverson.