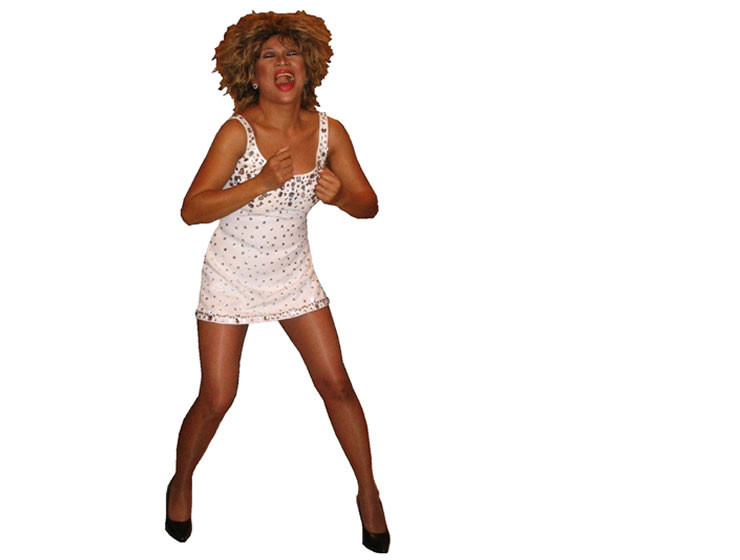 Luisa Marshall Tina Turner Celebrity Impersonator & Look Alike is the World R&R Tribute Artist Champion 2003. She is sanctioned by the National Association of Performing Tribute Artists and pays the ultimate tribute to the Queen of Rock and Roll in her spectacular Tina Turner tribute show.

Luisa Marshall as Tina Turner is a world class Tina Turner Tribute show that lets her audience experience this legendary diva. Her monstrous personality is larger than life. To see the Luisa Marshall impersonator show is to believe it. Audiences from all walks of life simply adored her powerful sound alike rendition of Tina Turner's greatest hit songs like Proud Mary, The Best, Better Be Good To Me, Private Dancer, What's Love Got To Do With It, Help, and We Don't Need Another Hero, just to name a few.

Luisa Marshall's uncanny resemblance to Tina Turner has heads turning everywhere she goes. People think this celebrity look & sound alike personality is the real Tina Turner. Her legs are so close to the Queen of Rock and Roll that they really think she's Tina. This truly special Tina Turner Tribute artist and impersonator is a once in a lifetime experience that makes this tribute to Tina Turner the most successful, the most fun, the most energetic, and the most entertaining.

”I would like to congratulate you for such a wonderful performance you did on stage at the Oprah Winfrey Show….it was great seeing Tina’s expression on her face watching you perform to “Simply The Best!”… Tina was amazed!!!… she asked several people who is that performing… Luisa Marshall, it’s an honor to call you a friend… something I will always treasure… What a treat for you & I performing on the same stage as Tina on the # 1 talk show Oprah Winfrey Show…Best wishes to you…. You’re Simply the Best!!!”
--Larry Edwards - Proud Larry, #1 Las Vegas Tina Turner Impersonator, La Cage

“..I had to stop and think for a second that that is NOT really Tina performing. I have seen MANY people impersonate Tina Turner, but the video was enough to put me in MAJOR shock. I actually got to perform with Tina Turner on her last tour, 24/7. It’s a long story how it happened, but seeing the dancers on the video and getting all the moves is AMAZING!…”
-- Donovan Clay, Dallas, Texas

"I just wanted to thank you soooo much for coming to Strut this year! You did a great job, getting the crowd dancing and having fun! I really appreciate your help and your positive attitude is very refreshing. You are a pleasure to work with. It was so nice to meet you both! I just couldn’t resist getting up on stage dancing with my co-workers. Thanks again, you rock!"
Alanna Koshlay, Marketing Coordinator, Coquitlam Centre

“…we tried so hard to get Tina Turner on my show, you have no bloody idea how hard we tried to get her….we could have had that wonderful woman (Luisa Marshall) and we could have faked the whole bloody thing. They would have never known the difference…”
--Vicki Gabereau - The Vicki Gabereau Show, Host CTV Television

“Luisa Marshall brought energy to the auction. Our guests were clapping and cheering from the moment she stepped in the room. The “Simply the Best” auction took off the minute she started and when it was over, the Boys and Girls Clubs of Bellevue was the winner! We raised over $400,000. My only problem now is, how to top that next year? Many thanks to Luisa Marshall. You are “Simply the Best”! ”
--Brigid Graham, Director of Development - Boys and Girls Club, Bellevue Washington

"...Thank you so much for making our gala last Saturday a resounding success! Thank you also for asking your friends, Retrospect, to sing a few songs – they were a hit! Everyone can’t stop talking about you – you really, really made our evening memorable. I hope our paths cross again!"
--Deborah Nicols, Former President - Childhood Cancer – the Cure is Ours to Discover

“…It was a great evening at the Hilton Vancouver Airport celebrating the “Hilton Connie Award” which recognized the hotel as the best in the Hilton system. The conclusion of the evening with “All Hail the Queen” Luisa Marshall was simply superb. Luisa Marshall’s energy level, enthusiasm, and portrayal of this great performer was well beyond our expectations. Going forward, the “Tiny Tina Show” will be highly recommended by Hilton Hotels Corporation. Extremely well done. All the Best!”
--Robert E Dirks, Senior Vice President - Hilton Hotels Corporation World Headquarters

Fill out this form to get more information about Luisa Marshall.