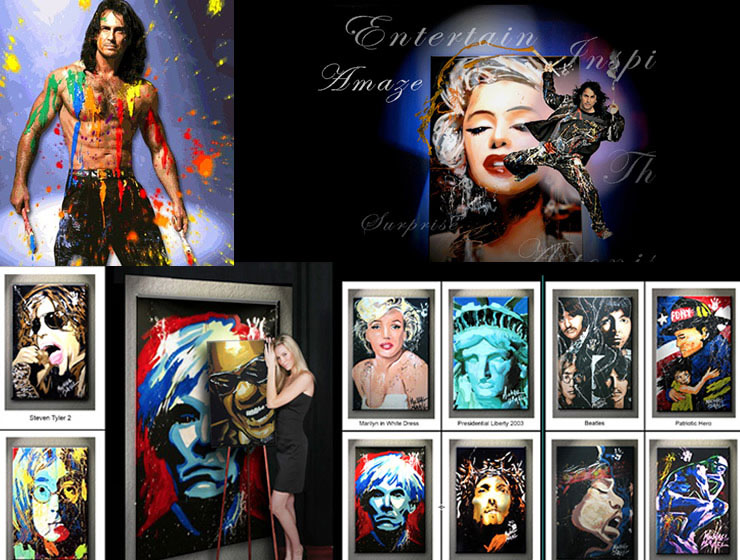 Wielding his paintbrushes like a modern-day swordsman, Michael Israel moves in rhythm to music while splashing his canvasses with riotous bursts of color.

From Olympic stages to presidential galas and Las Vegas events, Michael Israel is transforming the art world with his revolutionary combination of painting and performance. Indeed, how many performance artists can boast of having shared stages with such luminaries as Jay Leno, Brooks & Dunn, Tony Danza and others.

Breaking the stereotype of the reclusive, hyper-sensitive artist, Michael Israel allows audiences to witness the exhilaration of the creative process, in action. Wielding his paintbrushes like a modern-day swordsman, he moves in rhythm to music while splashing his canvasses with riotous bursts of color. The dynamic paintings that result from Michael Israel's speed-painting chaos depict some of the world’s most beloved icons, including presidents Ronald Reagan and Bill Clinton, Michael Jordan, Mohammed Ali, Frank Sinatra and Bono. true to his Utopian vision, Michael Israel’s most intense passion lies in painting unsung heroes and patriotic American images: New York firefighters hoisting Old Glory at Ground Zero, Special Olympians celebrating their victories, bald eagles soaring in the blue.

Given the powerful nature of his subject matter, and the magnificence of his artistry, each of Michael Israel’s paintings tell a passionate story. His performances regularly climax with standing ovations with fans rushing the stage for autographs, photos, or a souvenir paintbrush.

Fill out this form to get more information about Michael Israel.