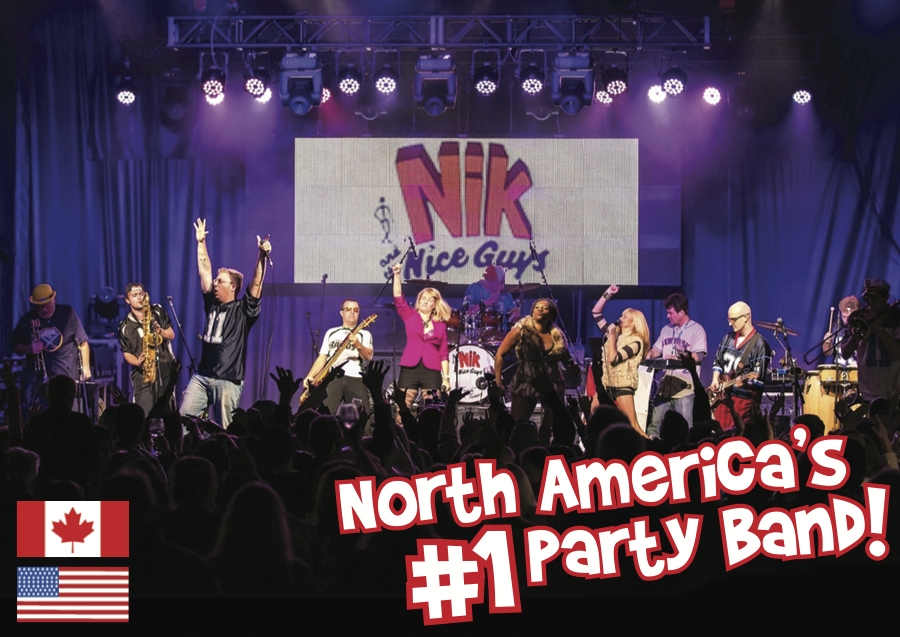 Nik and the Nice Guys

Nik and the Nice Guys is a high energy, rock and roll dance band and wedding dance band featuring 11 multi-talented musicians/performers, including female singer/dancers and a hom section. Besides playing great mainstream rock and roll, the group conveys a touch of Saturday Night Live craziness, while at the same time encouraging audience participation and dancing.

"We had Nik and the Nice Guys as our wedding band. They were amazing!! professional, passionate, and flexible. Worth the money to get a band, big diffrence from a DJ. We had so many compliments from guests about the band"
--Michelle, Wedding Wire Review

"I lost count of how many people aske me where I got the band and that it was best wedding they had ever gone to because of the band. They were worth every penny and more my guests didn't want them to stop the dance floor was packed the entire night and people from the wedding in the room next to mine came over to hear the band!!! DJ's are ok but Nik and the Nice Guys made my wedding great!!!!!"
--Jacquie, Wedding Wire

"We had the 11-piece Nik and the Nice Guys for our wedding and they were OUTSTANDING! We had so much fun on the dance floor. The band interacted well with the crowd and our guests didn't want the music to stop when the event was over. We had a mixed crowd - with ages ranging from 7 to 87 - and EVERYONE danced!"
--Ashley Tauno, Wedding Wire Review

"SPECTACULAR!!! Worth every penny! Their full band is amazing, and they laso have smaller groups available. Highly professional, respectful of all of our musical wishes, and the best band I havwe ever seen at a wedding!"
--Alicia, Wedding Wire Review

Blister In The Sun - Violent Femmes

Build Me Up Buttercup - Foundations

Fly Me To The Moon - Frank Sinatra

Get The Party Started - Pink

Givin' It Up For Your Love - Delbert McClinton

I Get A Kick Out of You - Frank Sinatra

I Love It - Icona Pop

I Saw Him Standing There - The Beatles

I'll Be There - Mariah Carey

In The Still Of The Night - Boyz 2 Men

No One - Alicia Keys

Party In The USA - Miley Cyrus

Sexy And I Know It - LMFAO

Under The Boardwalk - John Mellencamp

Walkin' On Sunshine - Katrina And The Waves

We Are Family - Sister Sledge

What A Wonderful World - Louis Armstrong

What Is Love - Night At The Roxbury

When A Man Loves A Woman -

You And Me & Bottle Makes 3 - Big Bad Voodoo Daddy

Fill out this form to get more information about Nik and the Nice Guys.