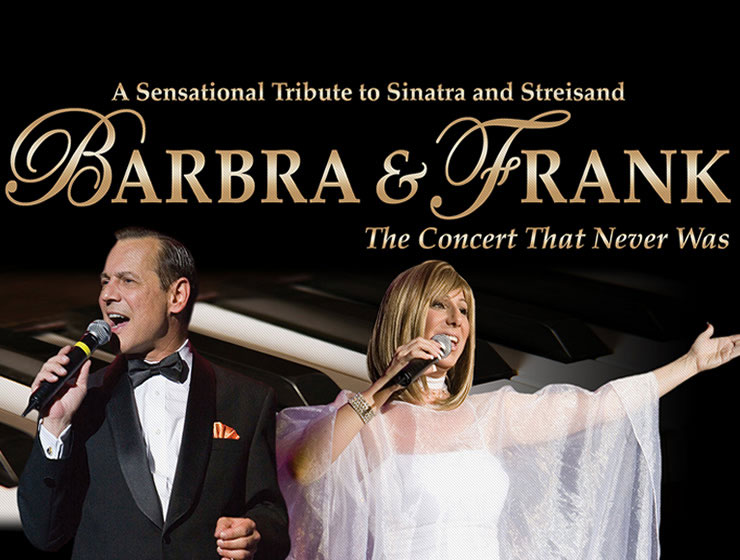 Owens and Anzaldo - Barbra Streisand and Frank Sinatra tribute Show - Be swept away as two of the most impressive celebrity impersonators, travel the world performing their uncanny tribute to these two icons

Sharon Owens and Sebastion Anzaldo performs "The Concert That Never Was", Barbra Streisand and Frank Sinatra! It is unlikely that these two powerhouse voices of the century would have ever shared the same stage...until now! They never actually worked together, exactly, except when they taped a duet in separate recording sessions, but it's tantalizing to think what it would have been like to have Barbra Streisand and Frank Sinatra teamed up for a concert tour.

Just imagine the possibilities. Would one have outshone the other? Would their onstage banter have been friendly or a bit snippy? The rapport of these two 20th century icons is immediately prevalent. What On magazine states, "As good as the music is, the banter between the stars is equally memorable."

Be swept away as two of the most impressive Barbra and Frank tribute artists in the business travel the world performing their uncanny tribute to the icons Barbara Streisand and Frank Sinatra." Sharon Owens and Sebastion Anzaldo.

"Sharon Owens and Sebastion Anzaldo, two of the most impressive celebrity impersonators in the business, travel the world performing their uncanny tribute to the two icons, Frank Sinatra and Barbra Streisand."
--Las Vegas Sun

"Sebastion is Sinatra in his hey day…Confident, cocky, and well, one word describes the man…Swingin!! When S.O. came onto the stage, I almost fell off my chair. She was a dead ringer”
Jerry Greenburg, Former President of Atlantic Records

"Sharon Owens is the Real Deal"
--In Touch Magazine

"If one closes the eyes and just listens, you would swear the actual person is on stage…Then when you open your  eyes, you see a swingin’ Frank."
--Las Vegas Leisure Guide

"Sharon Owens has the look, the voice, EVERYTHING! Even the nose! I was wowed"
--National Reality News Online

"The tribute artist sings beautifully, which leaves the audience wondering whether the real star could have  done an even better job. Sebastion Anzaldo resembles and sounds like a young, handsome Frank Sinatra."
--Showbiz Weekly

"Sebastion Anzaldo. is Sinatra in his hey day…Confident, cocky, and well, one word describes the man"
--Nightmoves Las Vegas

Fill out this form to get more information about Owens and Anzaldo.