CO138
Blue Moon Talent, Inc.
Stand-up Comedian
Music is an integral part of Pete George's act and he is an accomplished musician. He likes to call himself the Rock Star of Comedy but one look at him and we see that he's anything but.
Los Angeles, CA
USA
info@bluemoontalent.com
828-357-5537 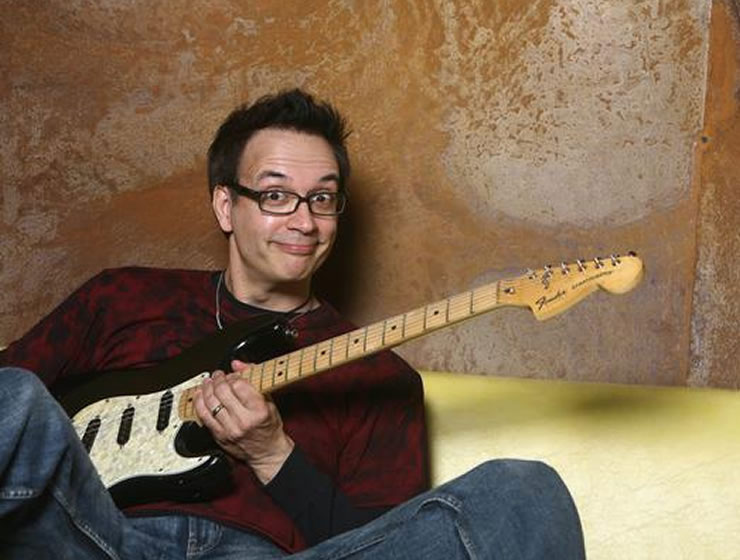 Music is an integral part of Pete George's act and he is an accomplished musician. He likes to call himself the Rock Star of Comedy but one look at him and we see that he's anything but.

Audiences have never seen anything like an exhaustingly funny Pete George performance. As he pinballs through his act, he leaves them laughing so hard they can barely catch their breath. His stage antics take us on a journey that includes hard hitting jokes, life stories, cartoon voices and even, yes, Rock and Roll. Mark Stuplin at E! Entertainment Television says, "Pete George is Spastically Funny!" and according to Las Vegas booker Kevin Kearney, "Pete George, in a word...Hilarious! He is the complete comedy package that you simply must see to believe.

Perhaps this energizer bunny began developing his off-centered and out-of-step approach to life when he was teased as a child, mistakenly labeled learning disabled and placed in special classes. Just minutes into Pete George's act he leads us to believe that maybe it wasn't a mistake after all.

Pete George. got his start in show business as a lead guitarist in a Cleveland based 80's rock group. "We wanted to be like the band A Flock of Seagulls, so we called ourselves "A Peck of Peckers." Discovering that being funny was his calling, Pete George ventured into comedy competitions and a quick string of wins set off a 20-year career that has included over 7,000 shows at a multitude of venues and corporate events, touring the world, headlining comedy clubs, cruise ships, colleges, military shows and special events. "One time I even opened for the Australian Male Stripper Show Thunder From Down Under", P.G. remembers "I thought it was a seminar on Irritable Bowel Syndrome."

Music is an integral part of Pete George's act and he is an accomplished musician. He likes to call himself the "Rock Star of Comedy" but one look at him and we see that he's anything but.

“I thought he was hilarious and he’s unbelievably talented! You don’t see a lot of people that can mix rock and roll music and comedy and he does it with flair!”
--Bill J, Los Angeles

“By far the funniest man I have seen in thirty years!”
--Carol H., Ventura, CA

“He’s is a funny, funny guy and WOW what a guitarist! I wanted to get up and start dancing”
--Arlene T., Los Angeles

“You were AMAZING tonight! My boyfriend Mike and I enjoyed your routine more than I can tell you! A true breath of fresh air with all the world being so damn politically correct. Your humor was great. And your musical abilities were awe inspiring! We wished it could have lasted way longer! Again, great job and we loved the show!!!!!”
--Gina & Mike, Coach House San Juan Capistrano, CA

“You kept the audience laughing all the way through. Many compliments were given at the end of the night of what a great success the event had been, dually noted by the standing ovation!”
--Victoria Hessel, Manager of Events - American Eurocopter

"I have been booking National Headliners for 15 years. I know that every single time Pete George hits the stage, my audience will have a great time! ...they will most definitely respond with, "We had a great time at the comedy club and the headliner, Pete George, was hysterical."
--David Stein, Reading Comedy Outlet

“It was a great show!... It was a GREAT show! I’ve seen all the guys in Vegas before, nobody better than he is”
--Ron B., Los Angeles

“He was Fantastic!! I have not seen my wife laugh that much since our honeymoon”
--Rob & Lyn H., Los Angeles

Fill out this form to get more information about Pete George.