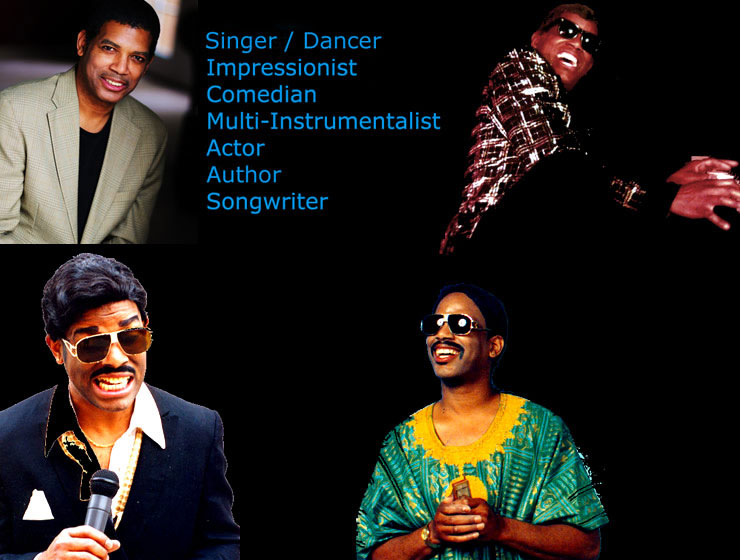 Pete Peterkin - This brilliant comedian and celebrity impressionist is being called the most versatile and exciting entertainer in show business today!

From Pete Peterkin's television appearances which include performing the opening ceremonies for Super Bowl XXVII as well as appearances on such top rated shows as Frasier, Baywatch, Cybill, The Young and the Restless, Entertainment Tonight, and The Fresh Prince of Bel Air starring Will Smith, this impressionist has gained a reputation as an entertainer who can truly do it all.

Pete Peterkin is also an accomplished comedy writer and songwriter for Theatre, TV and Radio as well as a gifted vocalist in his own right. He has received rave notices while sharing the stage with the likes of The Temptations, Smokey Robinson and Etta James.

“I heard him do Ray Charles and actually thought it was Ray!”
--Quincy Jones

“Every time I see him …he grows by leaps and bounds!”
--Ben Vereen

“He does over 200 voices..plays over 15 musical Instruments including DRUMS, SAX,HARMONICA, PIANO, JAZZ GUITAR AND he can dance! Incredible!"
--Koshi & Mel (Australia Morning Show)

"Extremely multi talented! I don't know which one of his characters I like the best!"
--Nick Cannon

"A GREAT entertainer who can do it all"
--Tony Orlando

"I heard him doing Levi Stubbs and couldn't believe my ears! If we ever get another opening for a lead singer I'm putting him on the FRONT burner!"
--Duke Fakir of The 4 Tops

Fill out this form to get more information about Pete Peterkin.