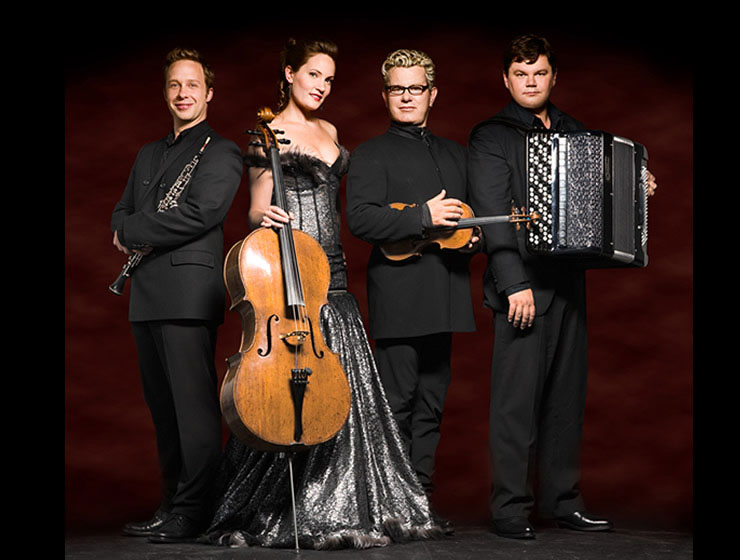 For over a decade Quartetto Gelato has enchanted audiences and critics worldwide with their exotic blend of musical virtuosity, artistic passion, and charismatic anecdotes.

Virtuosic showpieces, romantic tenor arias, gypsy pyrotechniques and a World Accordion Champion – this is Quartetto Gelato. Where music meets theatre and audiences are taken on an unforgettable musical journey! For over a decade, Quartetto Gelato has enchanted audiences and critics worldwide with their exotic blend of musical virtuosity, artistic passion, and charismatic anecdotes.

Classical in training – eclectic by design – Quartetto Gelato not only thrills its audiences with its multi-instrument mastery, but also offers the bonus of a brilliant operatic tenor. With a performance repertoire that travels the globe including classical masterworks, operatic arias, the sizzling energy of tangos, gypsy and folk songs, the group’s theatrical stage presence and relaxed humor establishes an intimate rapport with audiences worldwide.

Quartetto Gelato established themselves as dominant forces on the music scene early in their career by winning the coveted title of NPR Performance Today’s Debut Artist of the Year. The selection panel concluding the quartet was “an amazing ensemble that achieves the nearly impossible: they play salon music with real style and classical music with real precision; Great chops and a commitment in all that they play.” In 2007 Quartetto Gelato’s first DVD was picked up by PBS throughout the U.S. for broadcast. Recent concerts have included performances with the Toronto and Quebec symphonies, as well as prestige engagements including the Toronto Luminato Arts Festival, the Calgary Moziac Festival, and the “4X4” Festival in Binghampton, NY.

Not only is Peter “an amazing violinist capable of playing any style of music convincingly” but he has “one of the most gorgeous voices I have ever heard. I couldn’t believe any one person could possess that much talent.”
--Glenn Dicterow, Concert master, New York Philharmonic

“Larger audiences are inevitable not only because the quartet’s members are fine musicians but also because they have learned to mix entertainment and music.”
--The Washington Post

“Light programming, like comedy, is serious business. Quartetto Gelato has the stuff. Dry humor and occasional clowning are part of the quartet’s arsenal, yet first it meets the requisite virtues of skilled music-making. Its pleasure-giving is consistent.”
--Los Angeles Times

“If there were ever a group of musicians that could make anyone feel at home with classical music, Quartetto Gelato is it.”
--Newsday (NY)

“Larger audiences are inevitable not only because the quartet's members are fine musicians but also because they have learned to mix entertainment and music.”
--The Washington Post

Fill out this form to get more information about Quartetto Gelato.