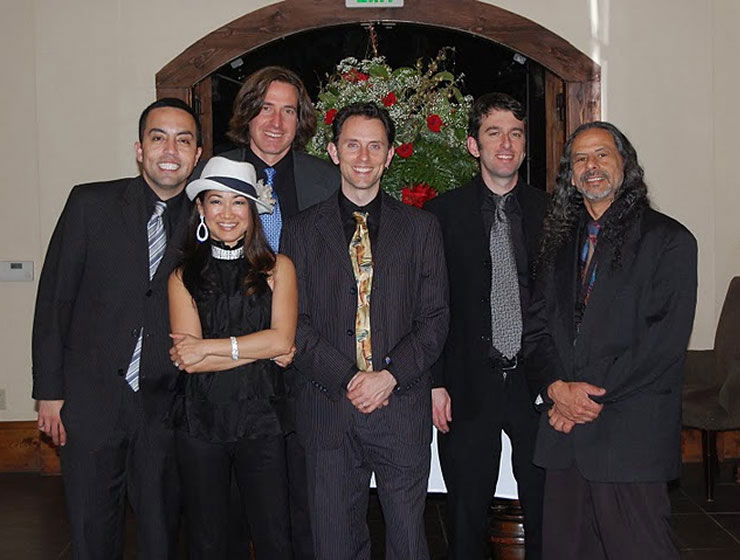 Raquel and the SF Latin Band

Raquel and the SF Latin Band is a classy and talented band that plays classic Latin dance music and Latin jazz. Their repertoire includes salsa, son cubano, cha-cha-cha and romantic boleros, and they are available for both dancing and background music. Says legendary Bay Area DJ Chuy Varela of KCSM, "Raquel and the SF Latin Band has garnered a fine reputation performing in local festivals and clubs… Raquel's style is sultry, with a comfortable and elastic range that allows her to softly express boleros or drive Cuban/salsa classics… Raquel is a singer who has finally arrived... this pint-of-dynamite will demonstrate she has it going on!" (Latin Beat magazine, December/January 2007, cd review of Soy Filipina). Raquel and the SF Latin Band performs the songs of the Buena Vista Club, Beny More, Celia Cruz, Eddie Palmieri, Johnny Pacheco, Orq. Aragon, Omara Portuondo, and originals.

Raquel and the SF Latin Band is lead by multi-award winning singer-songwriter Raquel Berlind and plays at festivals, weddings, private and corporate parties, clubs, restaurants, and casinos. They have also played extensively aboard Princess Cruise ships in the Caribbean islands and Mexico. The group can consist of four to six people depending on the client's budget, and can also provide a duo or a trio performing jazz, bossa nova, Latin and rumba flamenco songs. Raquel will work with you to find the right music and size of group for your event.

"Raquel and her band did an amazing job at our wedding! They played all of the songs we asked for -- including ones they had never played before -- and raquel played a couple songs that she had specifically written for weddings which were beautiful. Everyone raved about the band! Highly recommend her!"
--Heather, Wedding

"This is the second time that Racquel has played an event for Wholefoods Market. In the middle of Noe Valley we staged her for a grand opening party and everyone was blown away. With so much going on, at first you hear music, but as time passed it became obvious that Raquel had become the center of attraction. Great energy, sound and audience involvement. Make sure she brings her dancers with her, they were amazing. We'll be doing this again."
--Mimi F., Wholefoods Market, Emeryville, CA

"The jazz/latin quartet with Raquel played at my wedding reception and they were amazing! When I first was thinking about hiring them, I checked out their website at raq.com, and listened to the videos. They were very good. But when they started playing live at the reception, I was blown away. Those videos did not do them justice. The energy that they bring to the performance can not be shown in those videos. My wedding reception was a blast, and everyone who was there continues to tell me so. But it was Raquel and her quartet that made so great. I would hire them again in an instant! And I would VERY HIGHLY recommend hiring them over anyone else."
--Scarlett W., Wedding

"I had Raquel perform at my employee Christmas party in Half Moon Bay at HMB Golf Links. I wanted to do a Latin Theme and found her to be the best fit for the type of party I had for my guests. They are still raving over her performance and so am I. Thank you Raquel and your Band for doing the best job and making that night magical for everyone."
--Chef Richard

"Raquel and her husband throw together the most perfect ensembles for your event.  Being a music major through college as well as a drummer currently, when I first heard them at a wedding I was photographing, upon completing their first phrase, I was just mesmerized.  Raquel's soulful and smooth voice, her husbands amazing musicianship as well as their wide range of genres, makes them one of my highest respected groups out there.  I photograph over 75 events per year and hear a lot of entertainment.  Raquel and her husband are definitely at the top of my list!!"
--Damion Hamilton

"We hired Raquel for an alumni reception at the Disney Museum, and our guests are still raving about the band. The music was perfect for the atmosphere, we even had people dancing, which we never get. It was lively enough to keep the crowd entertained, but not so overwhelming that people were still able to carry on conversations.
Raquel was great to work with, professional, and just really a nice person. Highly recommended!"
--Eliza W., La Jolla, CA

"What a voice!  The first time I heard her voice was on the radio.  I had to pull over and call the radio station to find out the name of the singer."
--Chistina V., Alameda, CA

Fill out this form to get more information about Raquel and the SF Latin Band.