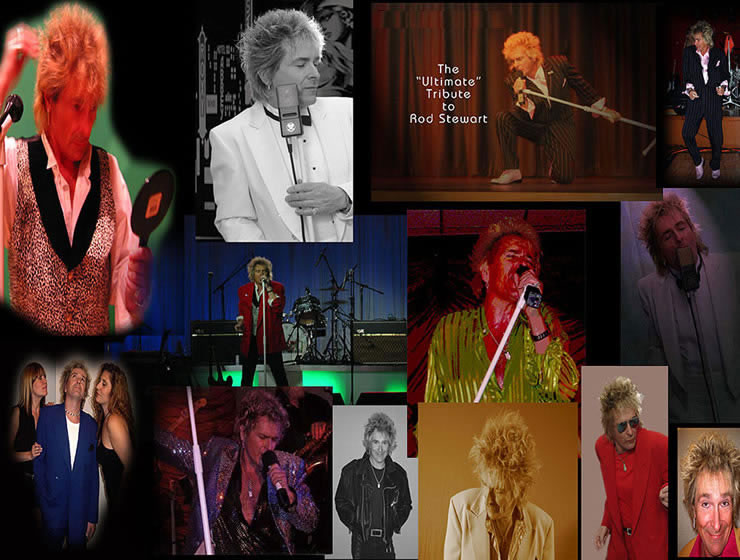 Rick Larrimore's amazing tribute to Rod Stewart is an exciting, unique stage show guaranteed to dazzle and entertain audiences every time and has been booked at a wide ranging array of venues and events.

This is the ultimate Rod Stewart tribute by Rick Larrimore. This show has been at a wide ranging array of venues and events! Fronted by the astoundingly Rod-like Rick Larrimore, the show covers the rock legend's entire career from his early years, through the disco 80's, to Rod Stewart's latest venture into great American classics. Fueled by a dynamic five piece band, dancing girls, and state of the art sound and lights, this is the most authentic Rod Stewart tribute concert as you could ever imagine.

This amazing Rod Stewart tribute show would not be complete without the enthusiastic and energetic performance of front man Rick Larrimore. He has performed and shared the stage with countless top national acts while refining that raspy Rod vocal style. Rick Larrimore naturally credits his vocals to Rod Stewart, but its his uncanny interpretation of Rod Stewart that has mesmerized and even fooled audiences! His unique tribute to Rod Stewart has created a major buzz from Las Vegas to Boston.

Rick Larrimore's tribute to Rod Stewart is an exciting, unique stage show guaranteed to dazzle and entertain audiences every time. Whether rocking out with the multi-talented five piece band on a large stage, or the one man show mesmerizing a corporate function, every audience will enjoy the experience of this ultimate Rod Stewart tribute.

"HE MADE THE PARTY!!!! Most Everyone who came to my event called the next day to comment on how GREAT Rick Larrimore was. He can read a crowd instantly. Beyond his looks and voice being "Rod Stewart" he is the nicest and funniest people I have met in a long time. Definatley worth every dollar of his fee. I would hire him again without hesitation. I actually wish I had some event coming up so I could do just that. To have him entertain at my event was the best decision I have made in a long time. Thank you for your services. I highly recommend people go to you first in search of what they are looking for. Again Thank you."
--Nancy Taylor

"Rick Larrimore did a fabulous job entertaining guests at my daughter's baby shower. His performance was upbeat, joyful, and zesty. And he is an amazingly talented man who sounded just like Rod Stewart. I especially appreciated Rick Larrimore's ability to quickly sized up the crowd and arranged his program accordingly. In fact, guests came up to me after the party and said that this was the best baby shower they had ever attended - no doubt due to the excellent entertainment provided by Rick Larrimore. I highly recommend him."
--Sandee J

"Rick Larrimore met our expectations. He was wonderful. He played good, and he engaged others in his pay. Everybody had great time of their life. He is a great performer. Anybody who hire him would have great time with Rod Stewart."
--Martine M

"Rick Larrimore was awesome! He was very entertaining and we all had a great time!"
--Michael L

"Our party consisted of about 150 people with a wide array of ages. We had high expectations and Rick Larrimore exceeded them. He engaged the audience right from the start and had them asking for more and more. If you want a lively and entertaining party Rick Larrimore is the way to go."
--William Z

Fill out this form to get more information about Rick Larrimore.