TR154
Blue Moon Talent, Inc.
Tina Turner Tribute
Samira - Tina Turner tribute's torrid vocals and full on energy and sweat will have you standing and dancing in the aisles. Close your eyes and you'll swear its Tina Turner.
Surry, BC
USA
info@bluemoontalent.com
828-357-5537 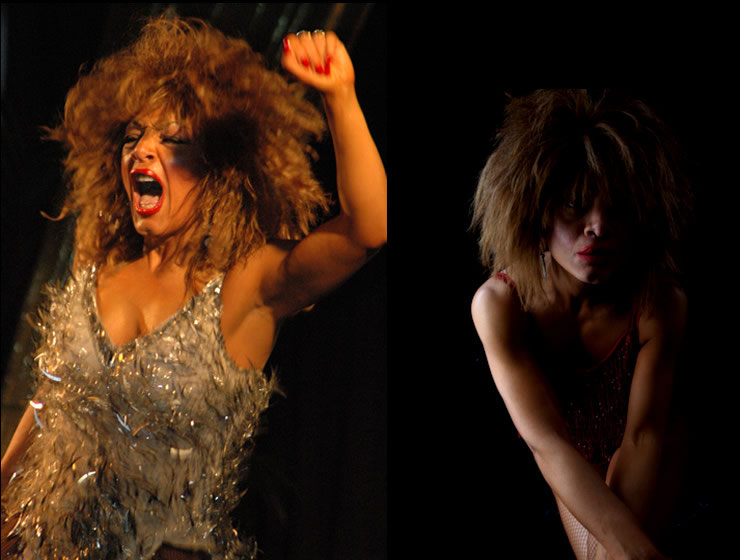 Samira - Tina Turner tribute's torrid vocals and full on energy and sweat will have you standing and dancing in the aisles. Close your eyes and you'll swear its Tina Turner.

Samira's full on energy, sweat and powerful voice will have you standing and dancing in the aisles. Close your eyes and you'll swear its Tina Turner. Open your eyes, the unmistakable legs, muscular body and you'll know it can only be "Truly Tina".. with the big hair, all the energy of the 70s and 80s, wild and provocative costumes and of course Tina Turner's hit songs like Proud Mary and Private Dancer. The stage will come alive with electricity.

Samira travels the world and is rated one of the top "Tina Turner" tribute Impersonator in the look-a-like industry.  Some performances include Australia, China, Guam, Mexico, Vegas and the Middle East for the troops and companies such as Mcdonalds, Phillips, Siemens, The Oilman of N. America, and Subway just to name a few. Samira was honored to perform in  "Great Hall Of The People" next to Tiananmen Square. Samira also speaks fluent Arabic which was helpful with her tour of the Middle East. Her love of the "Queen of Rock N Roll" has given her the drive to follow and reproduce every nuance of Tina Turner. This is why Samira is sought after as one of the leading Tina Turner tribute look-like impersonators world wide.

Tina Turner's torrid vocal interpretation and electrifying stage presence has always been an inspiration to Tina Turner Impersonator Samira who has managed to take the wonders of Tina Turner and replicate them with amazing energy and passion!

"The staff party I planned was simply the best thanks to Samira. she came in like a jumping jack flash and kept the energy going throughout the entire show. we were rolling on the river and dancing, clapping laughing, fun with how she engaged us all with a wild fun energetic performance. would hire her again and again. Samira rocked the day!"
--Carrie M.

"Samira, was our opening number to the conference. She was very proessional and I would book her for other events in an instant. Even the very early morning was no problem"
--Heather C.

"I Saw Samira headlining at the 2010 Winter Olympics in Vancouver. OMG I have never seen anything like her, The Legs and What a Voice. Samira you are SIMPLY THE BEST that I have ever seen."
--James M.

"Electric! From her top notch costumes to her ability to engage a very diverse crowd Samira was nothing short of spectacular! We were fortunate enough to have her perform for 2 nights and on the second night were treated to an extra set of her "Disco Diva" show. A treat to work with and I would not hessitate to fly her in again!"
--Janyce E.

Fill out this form to get more information about Samira.