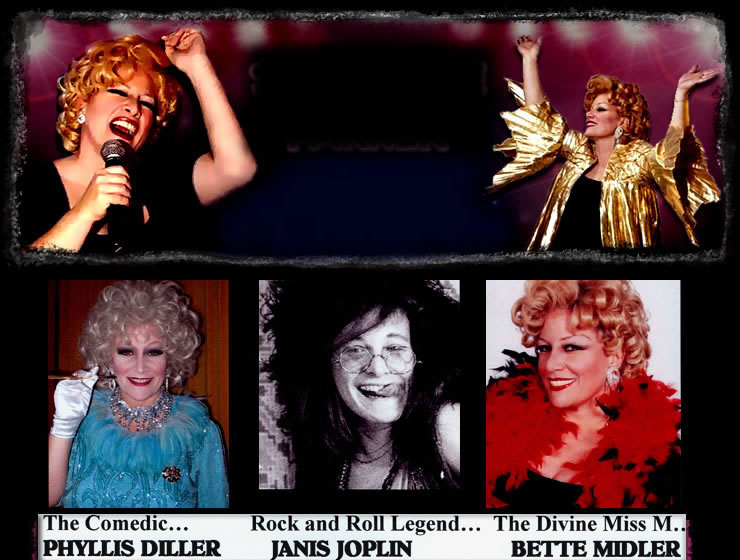 Sherie Rae Parker has performed as Bette Midler in some of the best clubs in Las Vegas and the Los Angeles area. She has also appeared on several national television shows and commercials.

Sherie Rae Parker is a talented performer who has paid her dues and is making her mark in today's entertainment field. In April 1983, she joined the original cast of Legends In Concert in Las Vegas as a Bette Midler Tribute performer. She has performed for Legends all over the world for the past 17 years. Her tribute to Bette Midler is remarkable.

Sherie Rae Parker's background includes music, dance and acting. She started out performing at the Great American Food and Beverage Company in the Los Angeles area. The Great American Food and Beverage Company was a unique, trendy restaurant that required all employees to sing and act as they served the customers. "It was a fun place to work", recalls Sherie Rae Parker, "Every night was something different, you had to be quick and think on your feet". Sherie Rae Parker has entertained in some of the best clubs in Las Vegas and the Los Angeles area. She has also appeared on several national television shows and commercials.

“One of the outstanding performances is Sherie Rae Parker’s impressions of Bette Midler, Phyllis Diller and Janis Joplin. That girl has some MAJOR pipes on her.”
--Lynn Collier “What’s On”

“Her Bette Midler vocal impersonations are not only convincing, but it is a delight to hear her varied range of songs including ‘Wind Beneath My Wings’ to ‘Boogie Woogie Bugle Boy’ as she was dancing and singing up a storm across the stage.”
--Marcia Steiner “WHOOT”

“Sherie Rae Parker is Starpower…Singer-comedian Sherie Rae Parker draws raves from the audience for her on-spot Bette Midler characterization. She fetches big applause for her take on Janis Joplin and loads of laughs for her Phyllis Diller impression too.”
--Hillary Green Showbiz Weekly

Fill out this form to get more information about Sherie Rae Parker.