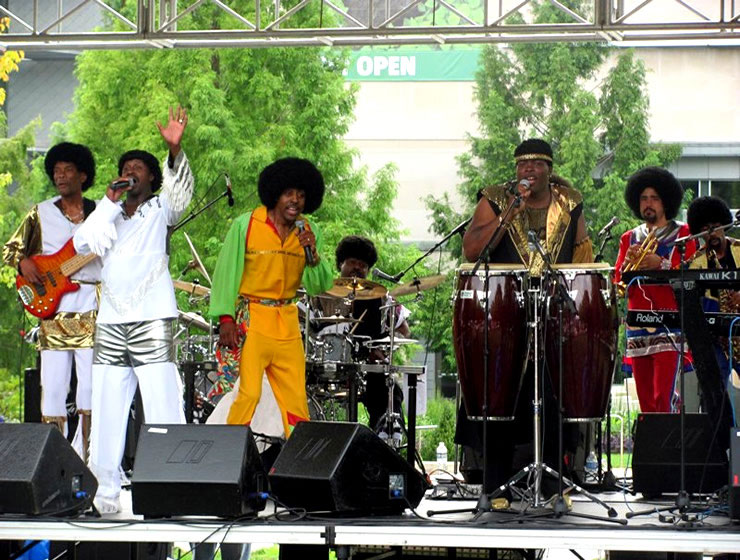 Shining Star 11-pc Earth Wind & Fire tribute brings that special, magical era of the 70's and 80's to the stage as only EW&F could do. Available for Concerts, Casinos, Clubs and Corporate Events.

This Earth Wind & Fire tribute brings that special, magical era of the 70's and 80's to the stage as only Earth Wind & Fire could do. Each member of Shining Star has studied their roll extensively. This Earth Wind & Fire Tribute will select the love song "Reasons" to put you in a romantic mood, then perform Earth Wind and Fire's remake of the Beatle's classic, "Got to Get You into My Life". Then, get the party jumping with a party song like "September".

A huge part of the equation, the soulful lead vocals and the sultry tenor tones are highlighted thru-out every song with unbelievable reproductions. Beautiful, full & lush harmonies are remarkably duplicated by Shining Star, if you close your eyes you will swear the original Earth Wind & Fire singers are on stage. If you have ever seen an Earth Wind & Fire concert, you would agree it was a memorable experience. The essence of that experience is channeled by Shining Star, for an inspiring performance. This Earth Wind & Fire tribute brings infectious energy to the stage.

Shining Star's show contains high stepping choreography and an energetic performance that only these pros can duplicate. Earth Wind & Fire's horn section was known for its crisp, sharp and intricate horn arrangements. Each member of Shining Star believes in bringing an authentic vibe to the stage as a form of ultimate respect to the greatest R & B act in the 70s and 80s.

"Shining Star played to a sold-out house at Freedom Hall and promptly validated why they are the premiere Earth, Wind, and Fire tribute band in the nation! Impeccable replication of the fabulous EWF sound, tasteful period-costumes, and smooth choreography made the show look and sound like an actual EWF concert. Our audience had a wonderful experience that evening and hoped to see them again!"
--Charles W. Sabey, Cultural Arts Supervisor - Freedom Hall

"This band has such amazing energy. The entire crowd was up on its feet from start to finish, dancing and having a great time!"
--Holly Marshall, Production Manager - Metropolis Performing Arts Centre

"WOW.....That was a great show!!! They nailed it!! Very pleasant and easy going! That’s what I like!"
--Cheryl DeKam, Entertainment Coordinator - Grand Falls Casino

"I heard you guys were GREAT and had a huge crowd. Congratulations!"
--Erin Bauer, Taste of Chicago - Programming Manager

"When working with a group of musicians with the talent and stature of Shining Star, I normally encounter egos and attitudes. We work with cover bands to national touring recording artist. But, upon meeting and setting up Shining Star, my crew and I were overwhelmed at how down to earth, professional, and all around good people this band is!! One of the best bands we've worked with. Look forward to working with them up again."
--Marvin Ervin, President and CEO - Narvelle Media

"Honestly, when Shining Star came across my desk I could not believe there could be a band that could recreate the Earth, Wind and Fire magic. They totally exceded my expectations! I've had The Commodores, Tower of Power, and countless acts from that era, and I must say that Shining Star's show was up there with the best of them. I've hired them on two occasions and I am working on a third."
--Rich Bentler, Entertainment Manager - Riverside Casino and Golf Resort

Fill out this form to get more information about Shining Star.