Dance Band DB229
Blue Moon Talent, Inc.
Vancouver, BC Dance Band
Side One dance band was founded when a musician and an event planner came together to create a dream-come-true for clients and musicians alike.
Vancouver, BC
USA
info@bluemoontalent.com
828-357-5537 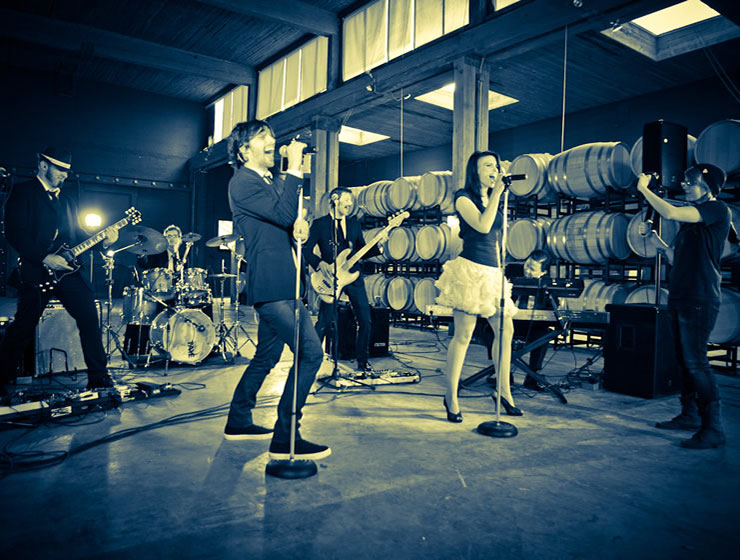 Side One dance band was founded when a musician and an event planner came together to create a dream-come-true for clients and musicians alike.

Having a live band is a must if you want your party to bring the house down. But it needs to be the right live band. We know that when you think of a 'wedding dance band' all sorts of terrible and tragic images come to mind, of aging men in ruffled tuxedo shirts playing things like "YMCA", "The Macarena", and "Mustang Sally".

Side One was founded when a musician and an event planner came together to create a dream-come-true for clients and musicians alike: A seriously rocking, jaw droppingly talented band that can play everything from Sinatra to Macklemore and everything in between. But a band that would never, ever, ever touch the chicken dance with a 10 foot pole. And to top it all off, it's at a price that won't make you gag either. We won't rail at you with the same words everyone else uses, like "dynamic", "energetic", and "engaging" - though all would apply. The point is simply that Side One is made up of extremely talented and experienced musicians, and their sets are crafted for the sole purpose of packing a dance floor, while avoiding entirely the typical cover band "cheese".

With a repertoire covering everything from Aretha to Lady Gaga, The Beatles, Pitbull, and Queen, and literally everything in between, Side One will customize the set to appeal to your guests. And at no point will there be any YMCA-ing. They promise.

"Side One is the BEST band ever!!! They did an amazing job at our wedding, our guests are still talking about how awesome they were. From the ceremony music, to the acoustic set, to the party band, we couldn't have hoped for anything more. And, they were so easy to work with and really accomodative in learning a few new songs that were special to us. I highly recommend them and if you book them for your event I promise you won't be sorry!!!"
--Kristen Scarpa, Married Sept 1, 2012 at Sparkling Hill Resort, Kelowna BC

"Side One performed at our wedding reception...they were amazing. Every person who attended shook their stuff for the entire night. I was impressed with the song selection as they were able to touch on every guest's interests. I still get feedback from my friends and family about what an amazing night they had due to the band. Thanks Side One... I almost want to get married again just to have a big party with you guys playing! ;)"
--Jenni Agnew, Married on Oct 23rd, 2010 at Dusty's in Whistler, BC

"I book over 100 musical acts a year. For those slots that require a cover band there are a lot of acts competing for my attention and it can be hard for any one band to get noticed. Side One stands apart from any that I have booked. Sure they are flawless musicians but that is the minimum of what I expect. What sets them apart are all the little things. They tailored their set times and content to my event. They communicated clearly and regularly. They were adaptable to changes in our event. They worked well with our production staff. They arrived without ego and most importantly, they appear to have a real joy on stage that infects the audience."
--URP Event Production

"Sorry that I can't tell other planners how awesome you are - because then it would be harder for us to book you :-) You guys ROCKED THE HOUSE and the clients were incredibly happy!"
--Tahira Endean, Cantrav Services

"Side One was one of the best parts of our wedding!!!!! We had a solo guitar during our ceremony and the songs we were able to choose added a wonderful personal touch. The sound tech managed the music on ipod during the dinner and he took care of all the details of fading in and out for speeches. Once the band got going for our first dance, the dance floor was packed for the rest of the night and didn't empty until it was all over. We had a blast, it felt almost like being at a totally awesome concert that was just for us :)"
--Kathleen Carlson, Vancouver Club

Fill out this form to get more information about Side One.