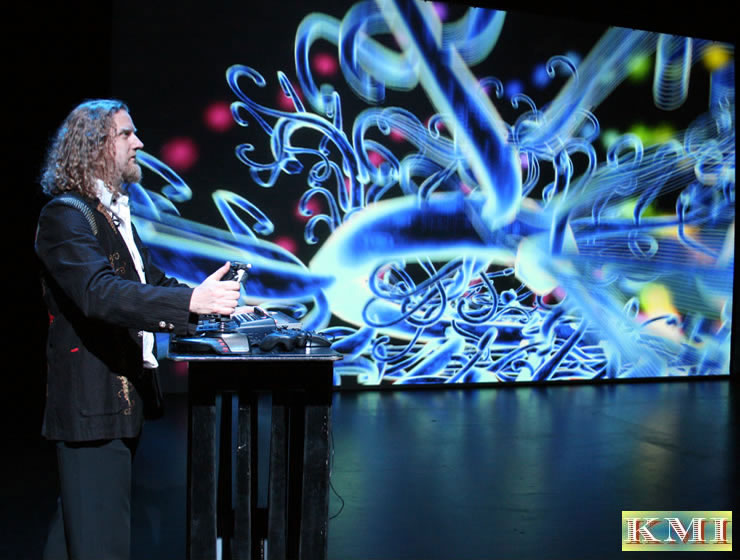 Spontaneous Fantasia, is an high tech artistic step up from live presentations like Laserium, Laser Fantasy, and the like.

Spontaneous Fantasia - Following in the vein of Laserium shows, but updated for the 21st Century in Virtual Reality!  From small venues, events to large scale theaters, Spontaneous Fantasia is an high tech artistic step up from live presentations like Laserium, Laser Fantasy, and the like. Spontaneous Fantasia, the brainchild of Oscar winning artist J.W., who instead of sitting at a console in the back or the front of the room, staring at a monitor, appears on stage like the Sorcerer's Apprentice, in the middle, joining us, the audience. His monitor is the theatrical canvas upon which audiences marvel at his ever-changing visualizations.

Spontaneous Fantasia stands like a rock star center stage with his “anitar,” a guitar for animation, slung over his shoulders. On one end, a touchpad for drawing. On the other, a joystick for movement. Between the two, an interface to a mixing board. Beginning by  asking for simple shapes... He draws these shapes as the heads of two-dimensional stick figures. Then they begin to dance and rotate in 3D over an ever-changing background. At another point, giant floating sculptures resembling abstract candelabras and chandeliers floated above us, their arms growing longer and in new directions with each passing moment. And as colored rings flowed over the screen, yet more rings flew from the sky, as Spontaneous Fantasia threw glowing wristbands into the audience. We then all waved them above our heads, becoming one with the show and extending the imagery beyond the screen.

“It’s an endlessly swirling fantasy that moves with beauty and wonder from the universal to the specific.”
--Glendale News Press

“Most of the after-show feedback was ‘WOW, what a great experience!'”
--Bonnie Fung, Macao Exhibitions

Fill out this form to get more information about Spontaneous Fantasia.