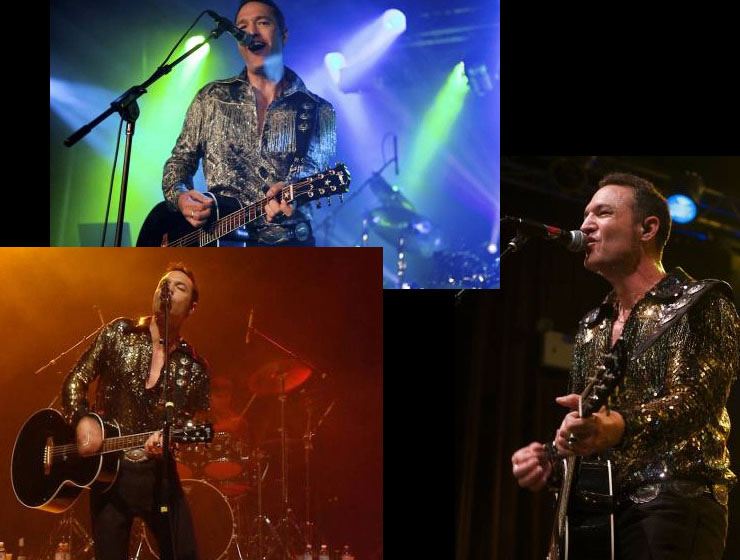 When your parents popped in a Neil Diamond tape on repeat during long interstate road trips, you reluctantly sang along. Never thought you'd turn out to be a Neil Diamond fan now, right? But singing along to Sweet Caroline and Brother Love's Traveling Salvation Show is so addictive now, you'd do anything to see Neil on stage. Super Diamond out of San Francisco can put a rest to that Diamond thirst. Super Diamond's group delivers a high-octane Neil Diamond tribute show that rocks!

"It's no secret that some of the most beautiful people in the country attend Super Diamondshows. But regardless of what your age, sex, race, color, creed, sexual preference, politics, IQ, salary, hobbies, dreams, desires, or hairstyle, we appreciate all of your support and enthusiasm over the last decade. "Here's to you, and the good times yet to come!"
--Vince, Chris, Surreal Neil, Rama, James & Matt

"It's been days since i saw your show... and i'm STILL thinking about you. you are truly rockstars worthy of worship. Austin, Texas is counting the days until you return."
--Clarissa, Austin, TX

"Just spent my 35th birthday at your recent concert here in San Diego with about 12 friends. Couldn’t think of a better place to be. I’ve been coming to see you guys for almost 10 years now and it never disappoints. Your concerts, especially your rocking renditions of Crunchy Granola Suite and Brother Love’s Traveling Salvation show take me back to my childhood and the 7 hour drives up to Mammoth in my parents Ford Econoline van where we would listen the 8 track of Hot August Night over and over. Great work and thanks for all the good times. Hopefully my 40th, 45th etc will be as memorable."
--S. Edwards, San Diego, CA

"I just caught your show at Bimbo's in San Francisco and it was awesome .... again. This is now the 3rd city I have seen you in- Irving Plaza in NYC and the Paradise in Boston 2 weeks ago-- and I have to say.. you didn't disappoint the hometown fans. Thanks for making all us "closet" Neil fans stand up and shout to the world.. We Love Neil Diamond.. No matter what our age! See you on the road again soon."
--Lynn, Boston, MA

"I’m totally looking forward to your March show in Cleveland. I saw you when you were at the HOB right after it opened here, and I’d have to say it was some of the best spent money on a concert, EVAH! This time I’m bringing my parents, brother, and sister-in-law. Neil Diamond was the only concert my dad has ever seen, and it was the only time I ever went to a concert with them. Now we can relive the magic that is Neil. I’m counting down the days…"
--Holly

"...I just had my first fix of Super Diamond. I am the most devoted Neil Diamond fan I know of and when someone recently told about Super Diamond; of course I was skeptical. I was "blown away". If you closed your eyes, you really thought Neil was there standing on stage. The lead singer of Super Diamond has Neil's voice down. I was also very surprised at the number of 20 and 30 somethings that like Neil's music. I had a wonderful time. Didn't know I could stay away till 2 in the morning. Been a long long time. I look forward to you returning to the Washington, D.C. area real soon!!! Thanks for a wonderful time. I know they were hot under those costumes."
--Robin Dinsmore, Rockville, MD

"I first heard you at the Belly UP in San Diego in 1996 and have been a fan ever since. I can’t count the number of times I have seen ya’ll play, including New Years’ Eve in San Francisco. I moved to Fort Lauderdale in 2001 and have consistently complained about how much I missed the live music scene in So. Cal. By chance I checked out your website and learned the band is going to be in Fort Lauderdale next month. Finally, a guaranteed good night of live music! Looking forward to the show once again and bringing my friends who have heard me talk about Super Diamond."
--Diane L., Ft. Lauderdale

"Super Diamond will forever be ingrained in my life. Quick story...three years ago last month I met what would turn out to be my future husband while waiting in line to see your show at the Cannibal Bar in Mission Beach. Our answer to the universal question of "how did you two meet?" always began the same, "Well, we met at a Super Diamondconcert...a rockin' Neil Diamond tribute band." Just wanted you to know that we were married last Sunday; Leap Day no less!!; and as a wedding gift, we received two tickets to see your show tonight at the Belly Up. We'll be out there singing along with all the other fans so, if you get this email before tonight's show....send some love to Jon and Natalie!"
--Natalie

Fill out this form to get more information about Super Diamond.