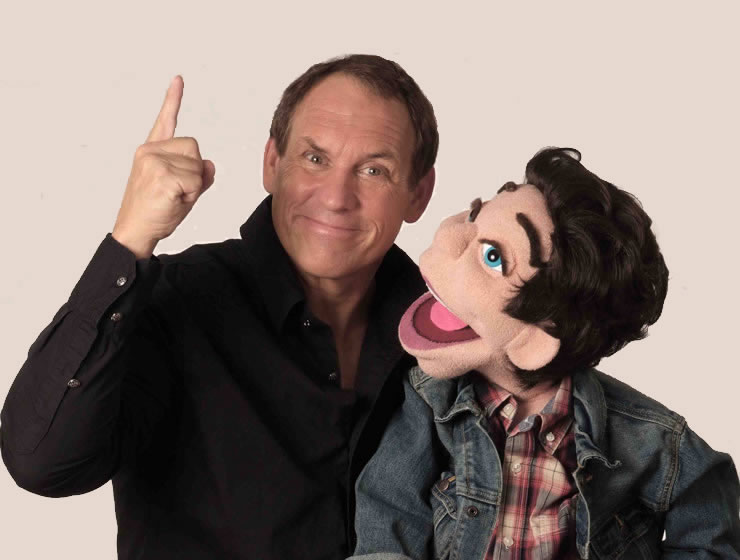 This G-rated ventriloquist, Taylor Mason, has been making audiences laugh very hard for 24 years as a professional comedian and top notch ventriloquist.

Taylor Mason has been making audiences laugh, very hard, for 24 years as a professional comedian & top notch ventriloquist. He has headlined every major comedy club in the USA. With the talent and experience to customize his performance while providing topic and client-centered comedy material, Taylor Mason's performance can cross-over into any given situation. Where the ventriloquist-comedians of today often exclude audiences by age, background, or demographic, Taylor Mason comedian-ventriloquist maintains an old-school ethic - he wants to include as many people as possible. By constantly working to the top of his intelligence, as well as keeping abreast of current social and contemporary themes, Taylor Mason uses every ounce of energy and boundless enthusiasm to maintain a very high level of comedy performance for his many audiences.

"This whole process was super easy, which is irrelevant if the performer can’t deliver, but if you have a performer who can deliver like Taylor Mason, it makes for an all-around great experience. T.M. was as low maintenance as you can get, and the people loved him!"
--Nate Ransil, Assistant Director of Program , Sandy Cove

"Taylor Mason was a “hit” with the audience and is an exceptional entertainer!!"
--Elizabeth Thummel, Endowment Coordinator, Cowley College Endowment Association

"Taylor Mason was very personable, not at all like some personalities we encounter who want to come across as “prima donnas.”
--Cricket Pairett, Assistant , Convention of New Mexico

"Taylor Mason was exceptional. Have got the job done and then some. We loved him!"
--Tom Goodlet, Harberside

"Despite the horrendous traffic getting here, and recent oral surgery, he arrived in time and ready to put on a great show. It took him 7 hours to get here from NJ… he may never WANT to come back… but we would gladly have him back! "
--Lori Rutherford, Director of Development, Fredericksburg Christian Schools

"Taylor Mason engaged the audience and had everyone captivated with fun and laughter. "
--Len Carter, The Lutheran Church of Our Savior

"Taylor Mason is a true professional. His accumulated life experiences, as well as performance experience, have sculpted a talent completely tuned in to his audience, the local and regional demographics, socio-economic conditions, and cultural characteristics."
--Gerry Vitek, Father John's Microbrewery

"The kids thought he was hysterical as well as the adults. He was by far one of the best entertainers we had all week for our event and I hope to be able to have him back in the years to come!"
--Hannah Stout, Children's Director , Trinity Fellowship

"Taylor Mason was an exceptional and easy performer to work with. He tailored his show to our crowd and did a great job speaking to the audience."
--Alan Gedde, Children's Pastor, Grace Community Church

Fill out this form to get more information about Taylor Mason.