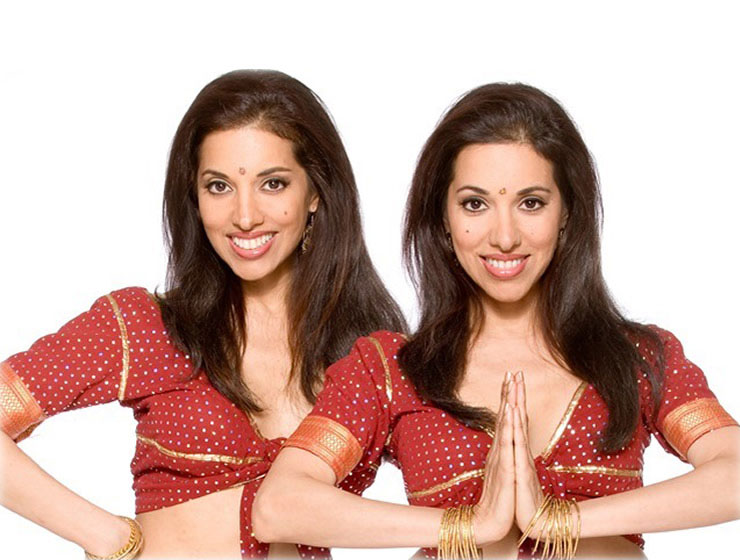 Presenting the world's Only "Identical Twin Snake Dancers." The Belly Twins were recently voted "America's Sexiest Twins," and selected as "Outstanding Young Women of America." They have been featured dancers on hundreds of national and international stages, as well as in films, television commercials, music videos, sitcoms, and talk shows. The Belly Twins duo have performed live stage shows on numerous occasions for world renowned artists, celebrities, royalty, and dignitaries, including former Prime Ministers of India and Lebanon, Eddie Murphy, U2, Hugh Hefner, and at Brad Pitt and Jennifer Anniston's wedding reception. The Belly Twins have been in dozens of music videos, including ones for Ricky Martin, Michael Jackson, Tom Petty, Dr. Dre, and Aerosmith.

The Belly Twins belly dancers have also appeared in numerous magazines, from the columns of People to the fashions of Vogue, as well as the pages of the national best seller, The Book of Twins. The Belly Twins were also featured in the national Twins 2000 year calendar. The Belly Twins dancers have co-created, starred, choreographed and co-produced a belly dancing four-set workout video series, Belly dance: Fitness for Beginners, and Slim Down, which Fitness Magazine rated as "one of the top ten best videos of the year 2001." They have also created a new three-volume set of instructional belly dancing videos, The Sensual Art of Belly dancing, which includes Basic, Beyond Basic and Mystic Dance.

Fill out this form to get more information about The Belly Twins.