Dance Band DB222
Blue Moon Talent, Inc.
Chicago, IL - Dance Band
The Chicago Catz are one of the Windy City's best kept secrets and treasures. For more than 26 years, this group of professional musicians have performed at some of the most prestigious private parties and events in Chicago.
Chicago, IL
USA
info@bluemoontalent.com
828-357-5537 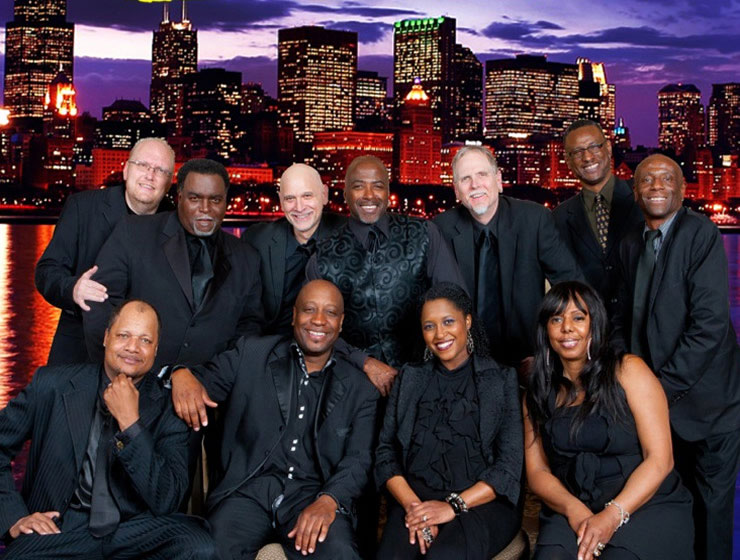 The Chicago Catz are one of the Windy City's best kept secrets and treasures. For more than 26 years, this group of professional musicians have performed at some of the most prestigious private parties and events in Chicago.

The Chicago Catz are one of the Windy City's best kept secrets and treasures. For more than 26 years, this group of professional musicians have performed at some of the most prestigious private parties and events in Chicago. "High society hors d'oeuvre music", you're thinking. To the contrary, The Chicago Catz dance band serve up and dish out the hottest "get out of your seat and dance" music in town!

The Chicago Catz are not only one of the most sought-after performance ensembles in the corporate entertainment field, they are among the top performance groups in the world – working full-time as session musicians with the music world’s biggest acts.

Beyond their unparalleled musicianship, what makes The Chicago Catz such an incredible asset to any event is their professionalism and responsiveness. On-time, on-target, and unbeatable when it comes to live performance and music that gets everyone in the room pumped and ready to go.

Weddings are made of a million moving parts.  With all the variables in play, it’s a comfort to know that at least one element – the band – has an absolute guarantee of success. The Chicago Catz are not only one of the most sought-after performance ensembles in the wedding universe, they are among the top performance groups in the world – working full-time as session musicians with the music industry’s biggest names. Unparalleled musicianship…unbeatable energy…and professionalism that guarantees the only thing you and your guests will have to do with The Chicago Catz is get up and dance!

"We got married July 5, 2014 and cannot say enough great things about this band! Richie took care of everything, and would email me back faster than any other vendor! Our first dance song was unbelievable... our guests are still talking about them and how great it was. When midnight came around, everyone was yelling, 'ONE LAST SONG' - they were such a hit! Book them!"
--Abbey Lane R. Fallon, NV

"The Chicago Catz is the only wedding band to consider! We had a very specific idea of what we wanted--old R&B and soul classics, not very much contemporary or modern music. They were perfect. They learned our obscure first dance and father-daughter dance for us and it was like stepping into a time machine. The dance floor was packed all night and our friends and family have not stopped raving about them."
--Grace G., Chicago, IL

"The Chicago Catz are absolutely INCREDIBLE! We hired them for my 2012 wedding and it was the best decision I made (apart from my choice of groom :)  The entertainment can really make or break a wedding so I did my due diligence and saw them play at another wedding as well as 2 music venues in the city before I chose them.  After I heard them play live the very first time, I just knew they would completely knock all the guests' socks off and I was right.  Working with them was also great- they listened to my preferences, and even learned several songs to play at the reception at my father's request.  Over a year later, and people are still telling us how great the band was at my wedding!!"
--Dani S, Chicago IL

"We hired The Chicago Catz as our wedding band and they were outstanding. If you are looking for a REAL band - not a wedding band - this is who you want. They rocked the house all night and everyone at our wedding was on the dance floor - from 3 yrs old to 85 yrs old. Check out their website to hear what and how they play. They were fantastic to work with and were able to honor all my requests for the wedding night: Piano and flute at the ceremony, then a jazz trio for cocktails, followed by a jazz quartet for dinner, and an 9 piece kick ass band for the reception. They did it all and even threw in an extra guy at the end!  If you are looking for a band that your friends and family will still be talking about months and even years later, you want The Chicago Catz. You will not be disappointed!"
--E.H.,Chicago IL

Ain’t Nothing Wrong With That-Robert Randolph

Ain’t To Proud to Beg-The Temptations

Best Of My Love-The Emotions

Dance To The Music- Sly and The Family Stone

Doin’ It To Death (funky good time) The J B’s

Don’t Stop Till You Get Enough-Michael Jackson

Fight The Power – The Isley Brothers

Funky Stuff – Kool and The Gang

Get Down Tonight-KC and The Sunshine Band

Give It To Me -Rick James

Got To Give It Up – Marvin Gaye

Hollywood Swingin –Kool and The Gang

How Will I Know-Whitney Houston

I Can’t Get Next To You-The Temptations

I Wanna Dance With Somebody

I Want To Take You Higher – Sly and The Family Stone

In The Midnight Hour – Wilson Pickett

Jungle Boogie – Kool and The Gang

Ladies Night – Kool and The Gang

Locked Out Of Heaven-Bruno Mars

Shake Your Body Down To The Ground – M. Jackson

Sing A Simple Song - Sly and The Family Stone

Thank You-Sly and The Family Stone

There Was A Time – James Brown

Think About It -Lyn Collins/James Brown

This Is How We Do It-Montell Jordan

We Want the Funk – Parliament/Funkadelic

You And I -Rick James

You Shook Me All Night Long – AC/DC

Fill out this form to get more information about The Chicago Catz.