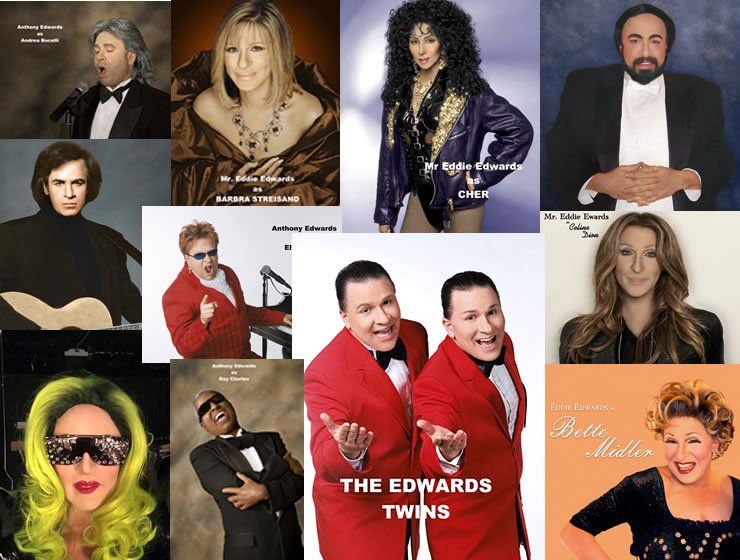 The Edwards Twins - This spectacular duo tribute show, direct from Las Vegas, has been voted as the #1 impersonation show in the country.

The Edwards Twins duo & tribute show, direct from Las Vegas, has been voted as the #1 impersonation show in the country by many in the industry! These very special impersonators look and sound like many superstars, such as Barbra Streisand, Neil Diamond, Elton John, Bette Midler, Rod Stewart, Sonny and Cher, and many, many more, all in one show.

The Edwards Twins will be one of the most extraordinary shows you will ever see. They are so amazing that the NBC Today Show did a feature story on them to rave reviews! Whether it's playing piano, dancing, acting, singing or doing over 100 impressions of the top super stars in the world, The Edwards Twins will WOW all age groups from 5 years old to 100.

The host of the NBC Today Show said "it's the most phenomenal act I've ever seen in my lifetime". If you love Vocal impressionists like Rich little or Danny Ganz or shows like La Cage or Legends In Concert , You will love The Edwards Twins and their DEAD ON impressions of Elton John, Neil Diamond, Billy Joel, Ray Charles, Cher, Andrea Bocelli, Stevie Wonder, Rod Stewart, Pavarotti, Bette Midler, Tom Jones, Barbra Streisand, Elvis, Roy Orbison, Tina Turner just to name a few. The Edwards Twins are considered by most of the major newspapers and magazine in the country as the most talented twin act in the world today.

"One of the Best shows I have ever seen!"
--Carol Burnett

“This is no Drag show. The Edwards Twins are as real as it gets. No lip-Syncing or electronic Trickery. Just pure talent. Flawless in every way."
--USA Today

"The Edwards Twins Vocals are amazing precise and on target! They’re the Best!"
--BroadwayWorld.com

"Their Look-a-likes are startling and amazing! The Edwards Twins will be one of the best shows you will ever see!"
--Boston Globe

Fill out this form to get more information about The Edwards Twins.