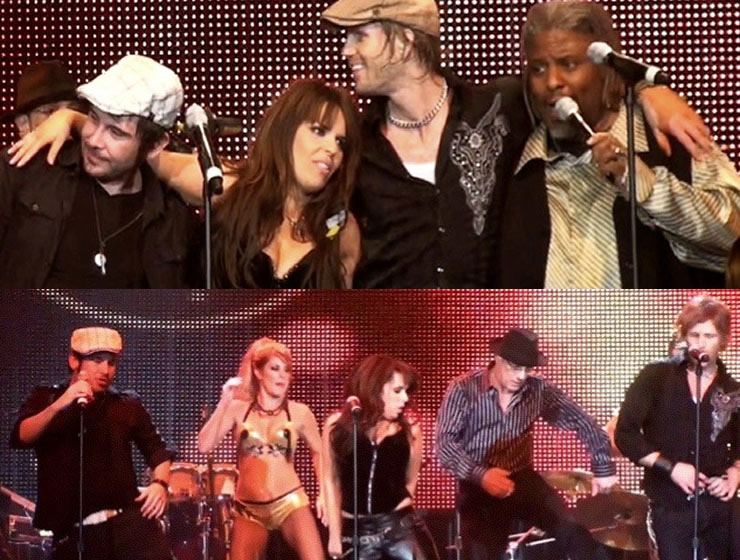 The MVPs play every style of music, from Sinatra to Michael Jackson, from Earth Wind & Fire to Lady Gaga, to The Black Eye Peas.

The MVPs play every style of music, from Sinatra to Michael Jackson, from Earth Wind & Fire to Lady Gaga, to The Black Eye Peas. The band’s well deserved national reputation is why they are rated as one of the leading top performing acts in the country, continuing to set the standards.  The band features full choreography integrated with the musical arrangements of Justin Reinhardt, their Music Director, who scored the movie "Swingers", HBO's "Sex in The City" just to name a few.

See why The MVPs is rated a step above the rest, always a definite crowd pleaser. Not only flexible, they tailor their performances to accommodate their clients, guaranteed to have an enjoyable and successful event. The great Tommy La Sorda once said, “If you like music like I do, get The MVPs, they're the best". The MVPs have worked with Ray Charles, Santana, Earth Wind & Fire, Joan Osbourne, Sarah Brightman, The Four Tops, Pointer Sisters, The Temptations, Tom Jones, Kelly Clarkson, The Gypsy Kings, Kenny G, Richie Zambora, Sheila E, Blonde, Devo, and most recently performed at Caesars Palace for NYE 2014 to open for Katy Perry.

"The MVPs was AMAZING! Everyone gave us compliments on the band all night and the whole next week! I think it was one of people's favorite parts and it certainly was one of our favorite parts! Thank you for all your help! Please thank all the members of The MVPs too! We loved them!"
--Caroline P., Bride, Dunwoody Country Club

"The MVPs was AMAZING!!!! We were so impressed how great they sounded and how much they interacted. We LOVED THEM! My dad said a lot of his friends asked about them and couldn't believe they weren't at $10,000-15,000 band! Thank you so much."
--Whitney R., Bride,The Hill- Athens, GA

"I just wanted to reach out to you personally an thank you for everything you did to help us choose The MVPs for our band for our wedding. They were wonderful, beyond words actually. We are still hearing from guests about how amazing the band was. They were beyond talented, professional, nice (which isn't always a guarantee), and really made the night personal just by building a relationship with the crowd. I just wanted to touch base personally and tell you how much we appreciated everything."
--Stefanie S., Bride

"The MVPs was amazing! The literally kept the party going all night, just like I had hoped. Thanks for the recommendation. My guests loved the band and didn't want to go home."
--Hope W.,Wedding Planner

Fly Me To The Moon (Frank Sinatra)

Under My Skin (Sinatra)

Have I Told You Lately (Rod Stewart)

The Way You Look Tonight (Sinatra)

All Of Me (Sinatra)

When I Fall in Love (Sinatra)

Heard It Through The Grapevine (Gladys Knight)

You Are the Sunshine of My Life (Stevie Wonder)

Papa Was a Rolling Stone (Temptations)

I Got You (Feel Good) (James Brown)

Get Down Tonight (KC & The Sunshine Band)

Shake Your Body Down (Michael Jackson)

I Will Survive (Gloria Gaynor)

We Are Family (Sister Sledge)

Give It To Me Baby (Ric James)

Got To Be Real (Cheri Lynn)

Back In Love (LTD)

I Wanna Take You Higher (Sly & The Family Stone)

Saturday in the Park (Chicago)

Hard To Handle (The Black Crowes)

I Shot The Sheriff (Eric Clapton)

Listen to the Music (Doobie Bros.)

Should I Stay or Should I Go (The Clash)

You Shook Me All Night Long (AC/DC)

Living On A Prayer (Bon Jovi)

The Bird (The Time)

Tell Me ‘Bout It (Joss Stone)

Aint No Other Man (Christina Aguilera)

I Kissed a Girl (Katy Perry)

Since U Been Gone (Kelly Clarkson)

Rolling In The Deep (Adele)

DJ’s Got Us Falling In Love (Usher)

Only Girl In The World (Rihanna)

Give Me Everything (Pitbull)

I Need To Know (Marc Anthony)

Fill out this form to get more information about The MVPs.