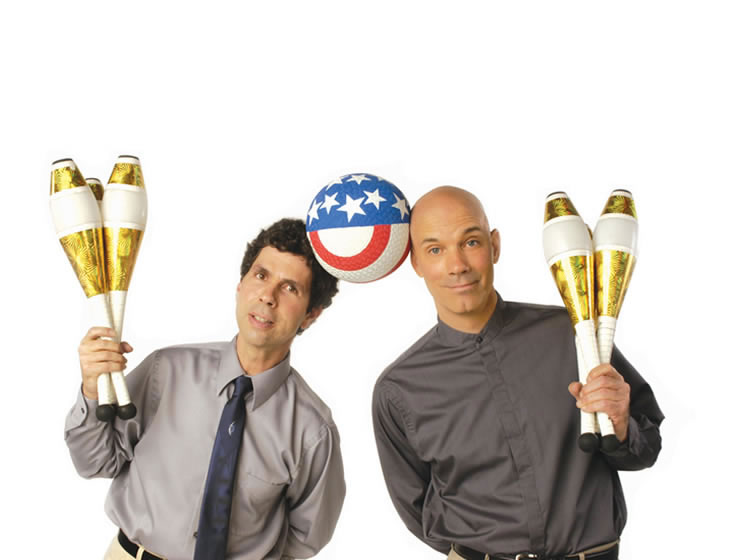 The Raspyni Brothers create hilarious events that corporate audiences never forget. They understand the importance of corporate entertainment and they work hand-in-hand with you to get it right.

You could put that responsibility into hands less-capable than these four-time World Juggling Champions with over 200 national television appearances and 1,000 successful corporate shows, but we don't recommend it.

Performing together since 1982, these two "catchers in the wry" never fail to win over even the most demanding, hard-to-please crowds. In addition to the tremendous success they enjoy in the field of corporate entertainment, The Raspyni Brothers also tour as an opening act for dozens of superstars such as Robin Williams, Billy Crystal, Howie Mandel and Dennis Miller.

"Complementing [Robin] Williams' fast-and-furious comedy assault was the more laid-back style of The Raspyni Brothers who opened the show. Although billed as a juggling act and despite the fact that they actually do juggle almost the entire time they are on stage, The Raspyni Brothers were a comedy duo. And a delightfully surprising one at that."
--Ft. Lauderdale Sun

"A juggling team whose breathtaking stunts, dry wit, and yeoman-like work ethic made them a sure fire opening act, has made the jump to headliner status. Judging from a recent performance, The Raspyni Brothers deserve the promotion."
--Associated Press

"The audience was warmed up for Howie Mandel by a well-oiled comedy/juggling machine called The Raspyni Brothers. Like Mandel, the brothers didn't take themselves seriously and used audience participation well. They combined elements of stand-up with some truly amazing juggling feats.
--Edmonton Journal

"Wonderful... Thank you for being with us... very, very funny..."
--President Reagan

"Fantastic... It's a pleasure to watch you guys work..."
--Johnny Carson

"I love to see Russian circus skills on American boys... you guys are great"
--Robin Williams

" . . . Brilliant improvisers. A malfunctioning microphone was handled so well it should be a part of their act!"
--The Edmonton Sun

"... Then The Raspyni Brothers trotted on, and did the joint light up!"
--Austin Chronicle

"There are jugglers and then there are The Raspyni Brothers..."
--The Atlantic Press

Fill out this form to get more information about The Raspyni Brothers.