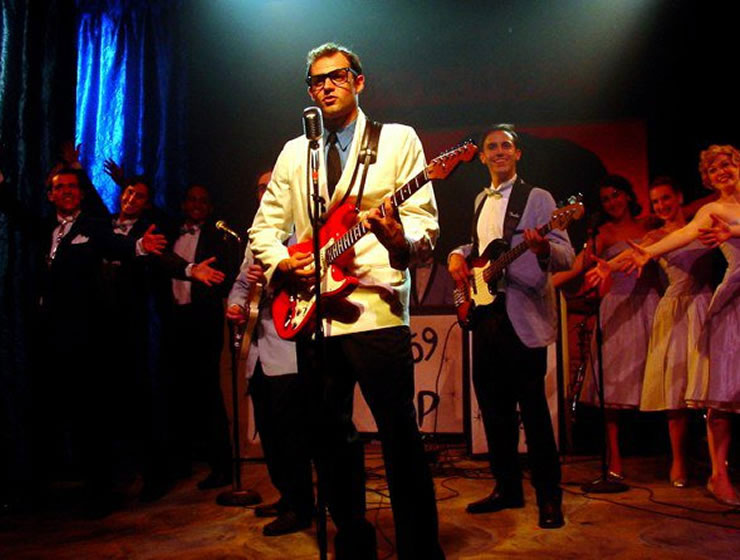 Buddy Holly and the Crickets Tribute

The Rave Ons are a high energy rockabilly band originally formed to revitalize the music of Buddy Holly and the Crickets.

The Rave-Ons are made up of cast members from the national tour of the hit musical, BUDDY – THE BUDDY HOLLY STORY, The Rave-Ons are a high energy rockabilly band originally formed to revitalize the music of Buddy Holly and the Crickets.  The Rave-Ons produce and star in two different Buddy Holly tribute shows and have over a hundred 50's rockabilly tunes in their repertoire, as well as some original tunes.

The Rave-Ons are led by Todd Meredith, who has performed in 17 separate productions of the musical as Buddy Holly and in tribute concerts for the past seven years.  He’s joined by Bill Morey on the upright bass, Joe Cosmo Cogen on drums, and Jeremy Renner on guitar. They have played together all over the USA, delighting audiences in New York City, Reno, Memphis, Nashville, Jacksonville, New Jersey,  Pennsylvania, Arizona, Colorado, Missouri, and even Buddy Holly's hometown of Lubbock, Texas.  Unlike other tribute bands of the same nature, all members of the Rave-Ons are in their twenties and give their shows a youthful energy and exuberance that cannot be matched.

"Just got home from seeing Todd Meredith for the first time in Coral Springs Fl.
The show and the music were better than I ever expected. The entire audience was standing and singing along at the end. If you have an opportunity to see this group do so."
-Jeff L, Coral Springs, FL

"Todd and his crew are fantastic, and this turned out to be one of our strongest fund raisers to date! we had over 700 people attend two nights, and EVERYONE loved it. Todd is the nicest guy you'll meet, his band members are polite and easy going, and they know how to rock out! I can not recommend them highly enough!"
-Kerby Thompson, Cortland Repertory Theatre

"The gentlemen that make up the Rave-Ons are a genuine pleasure--they are equally as talented as they are easy to work with. With a full house for a one night only fundraiser, we were thrilled with how successful the evening was. Leading up to the concert, communication was quick and concise and, because of that, it was very easy to get the guys on stage with very little time in the space. I highly recommend the Rave-Ons--you would be hard pressed to find a better evening of music performed by a nicer group of musicians."
-Quin Gresham, Arrow Rock Lyceum Theatre

"I contacted Todd for the New York State VFW District 5 convention in Corning NY, we came to an agreement for his services very quickly. Upon arrival he and his bandmates spent an evening meeting us and our members-not just showing up but interacting. From the start we realized we had something special! Talent, appreciation for what our organization is about, exciting entertainment, and a group of consumate professionals who were passionate about their work and who helped us to offer a VERY special night that will not soon be forgotten by those fortunate enough to attend. We as an organization can not stress enough how great these gentlemen were. I personally want to thank Todd and each of the band members-your willingness to offer the fun and excitement and provide that special magic for the moment is truly respected-THANK YOU and I and those who attended would offer a resounding recommendation at any time for your services. We fully intend to have you provide entertainment at other events within the VFW here and in New York State!"
-Brian Demeritt, Corning, NY

"I saw Mr. Meredith play Buddy Holly at the El Dorado Casino in Reno, NV last month, and it was hands down the best show I have ever seen! My girlfriends and I felt like we were back in high school listening to him play Buddy's music! Not only was he a great performer, but we got a chance to meet him after the show, and he is a truly kind and gracious person as well!"
-Dorothy T, Reno, NV

"Todd played the title role of Buddy for us for about 55 performances during a 10 week run in 2008. He was a joy to work with. The critics adored him. The audience LOVED him and he received a standing ovation for every performance. He has no attitude whatsoever and I would hire him again in a heartbeat."
-Denny Hitchcock, Circa 21 Theater, Rock Island, IL

Fill out this form to get more information about The Rave ons.