TR167
Blue Moon Talent, Inc.
Frank Sinatra Tribute
Not only does Vaughn Suponatime bear a striking resemblance to a young Frank Sinatra, but he brings his own brand of humor and showmanship to every performance.
Van Nuys, CA
USA
info@bluemoontalent.com
828-357-5537 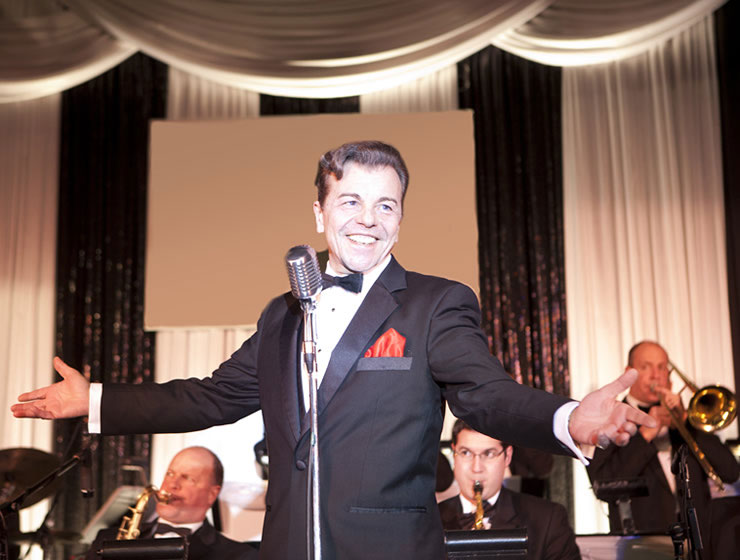 Not only does Vaughn Suponatime bear a striking resemblance to a young Frank Sinatra, but he brings his own brand of humor and showmanship to every performance.

This Brooklyn performer studied acting at The New York Academy of Theatrical Arts and The Lee Strasburg Theatre Institute. While studying this craft, he developed his unique stand-up comedy act and began appearing at comedy clubs and universities around the country. Vaughn Suponatime then moved to Los Angeles and was welcomed into the improvisational comedy inner-circle as a member of The Groundlings and Off The Wall, where he worked with such notables as Phil Hartman, John Ritter and Robin Williams. Here's one Frank Sinatra tribute show you won't want to miss!

“Without exception, you exceeded my expectations on every single job. My clients raved about your singing ability, your looks, your professional attitude and your willingness to go the extra mile. It is not often that I have the good fortune to work with an entertainer who has all the elements put together.”
— Linda Collins, Classique Entertainment

“Vaughn Suponatime has proven to be a first class entertainer that has performed Sinatra musical material with class and respect for this ultimate entertainment icon. He has a great sense of on stage humor and definitely has been a resounding success with all the many clients I have engaged him for.”
— Brian Ayers, ALWAYS ENTERTAINING – Las Vegas

“The attendees at our fundraiser loved Vaughn Suponatime and his selection of Frank Sinatra tunes. He is not merely a singer of songs, he is, while on stage,Sinatra himself. He looks like him, walks like him, talks like him and sings like him.”
— Francis X. Sexton, President Rotary Club – Coral Gables Florida

“Vaughn Suponatime's performance was outstanding and received five-star reviews. He is very easy to work with, has an outstanding voice and his appearance to the “Chairman of the board” as Frank Sinatra was truly remarkable.”
— John A. Viniello, President National Fire Sprinkler Association

“Your song selection, vocalization, comments between numbers and overall demeanor was such that we were transported back to a musical era we all remember fondly. Spending the evening with Frank was a blast!”
— J. Brian Smith, President Smith & Harroff

Fill out this form to get more information about Vaughn Suponatime.