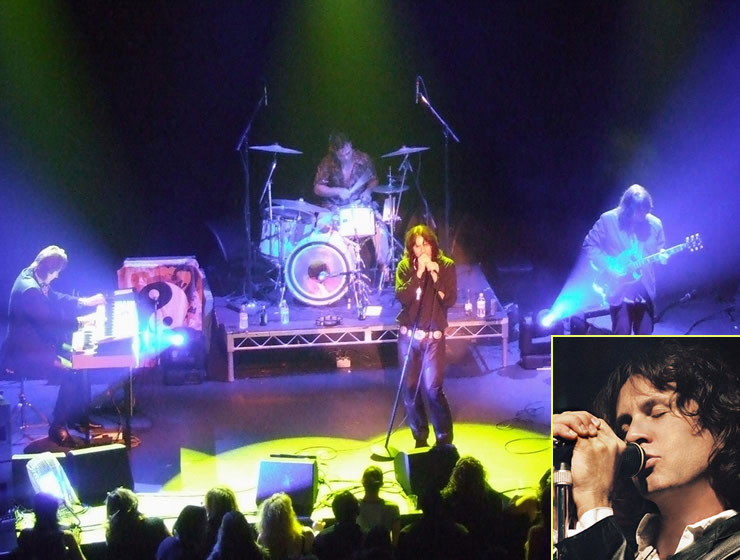 Wild Child Doors tribute band performs at premiere clubs throughout the U.S. and Europe and frequently headline at the Whisky-a-Go-Go in Hollywood.

Wild Child is a Los Angeles based doors tribute act with 20 solid years of performance in the competitive L.A. Music Scene. Faithfully re-creating a live Doors Concert on stage, this is not a typical Doors tribute band! Wild Child's music is painstakingly reproduced and combined with the voice, look and essence of Jim Morrison live on stage. They mirror the depth, energy and emotion of The Doors concerts as they were live back in the late 1960's. Wild Child doors tribute also utilizes the same musical instruments live as The Doors did over 35 years ago.

Wild Child Doors Tribute band performs internationally, playing to packed venues around the globe. Wild Child broke into the national act venue circuit before any other tribute act, selling out countless shows from its beginning to the present. In the late 80s, the lead singer was under consideration to play the lead actor in the Oliver Stone movie "The Doors." Many experts have complimented his stage rendition of Jim Morrison. Concert goers leave Wild Child6 concerts in amazement and disbelief. This amazing Doors tribute band relies on stage craft and musicianship to create an event that people will remember, without corn ball antics and banter that many tribute bands incorporate.

"I recently saw Wild Child play for the first time in Redwood City, CA. I am not a Doors Fan (per say) as I mostly listen to The Moody Blues, Zeppelin, Beatles &CCR, but I was truly amazed at how great Wild Child is and absolutely love Dave Brock’s style of performance (showmen’s ship)! BRILLIANT to say the least!!!!"
--Norcal Fan

"Just saw this Band for the first time and I am TOTALLY HOOKED! I am not even a major Doors Fan per say, but I was amazed at this Band's showmen's ship to put on such a great show! DB is truly an entertainer who should be a Rock Superstar! (he is in my eye's instantly after seeing him perform)..."
--Patty, San Jose, California

"First of all your CD is awesome. I agree 100% that this could be passed off to a seasoned collector as an unheard Doors Live CD. I too have played the CD for friends and family who listen to The Doors and had every single one of them fooled in thinking they were actually listening to The Doors. When people find out it's Wild Child, they are ecstatic about attending the next show."
--Frank

"DB was Morrison's presence onstage at THE STUDIOS, Merthyr Tydfil South Wales. I have been a massive fan of THE DOORS since I was 12years old and idolized Morrison...not ever having the opportunity to ever see him I feel privileged to have captured a glimpse of him & The Doors via Wild Child... what a true tribute! Needless to say I am now a Wild Child fan too! Everyone I spoke to in Merthyr agreed they were great... ...WHEN ARE YOU COMING BACK TO WALES???? We will be waiting for you with bated breath."
--Zelda

"When I first saw Wild Child perform, it was after I had joined the band, but I had never been to a Wild Child show. I sat in the back at The Coach House, and was totally blown away by his act. It's not just that he looks and sounds like Morrison alone (which he does), but he has the actor's gift for creating a suspension of disbelief - you know Jim is dead, this is not The Doors, etc., but your mind lets you relive it for a while. A guy who is only a mimic can't do that- Wild Child is talented musically and has an intuitive acting sense that lets him bring the Morrison persona alive. He doesn't have to "get into Jim's head" and all that nonsense- it's called ACTING."
--Kit Potamkin

"Hey guys, I stumbled across you guys on the internet. I've seen Wild Child twice and in the 80s' a band called The Back Doors and you guys sound better than the real thing! Come to the Virginia Beach, Va. area, please. I am going to see Wild Child for the second time and your band sounds great! But Wild Child is incredible as well. I have never heard ANY band sound better than Wild Child. The singer is superb. Good luck and thanks for sounding so authentic!!!"
--Hatton

"The band enters the stage first, then Dave enters from the catwalk as sexy as he can be. Then everyone starts screaming and jumping in excitement. he started the show with "Strange Days." Oh my god, I thought I was going to faint, he sang Riders on The Storm, People are strange, Moonlight Drive, Backdoor Man, Love Street and more I sort of forgot already. But yes it was super great the greatest experience ever."
--JS

"I just wanted to reach out to you and say thank you for keeping the spirit of Jim Morrison and the Doors alive within me. Without Wild Child, I'm not sure if I could continue the enthusiasm that I feel for the Doors. I've seen you perform many times, and it's one of the few acts that I know comes through every time. I will continue spreading the word about you."
--Cesar

Fill out this form to get more information about Wild Child.